In Part 1, we asked the question: What are the scientists at CERN really looking for? The information seems fantastical or even apocalyptic, but is it conspiratorial?

“This isn’t an episode of Saturday morning cartoons. Sorry to disappoint anyone wanting to test the event horizon theory but I think we’re stuck here in this time zone for a bit longer,” wrote Researcher Sofia K to a group of concerned citizens who were discussing CERN. Her brother, a quantum physicist, has worked on the collider on three occasions.

Sofia explained that until the collider was built, there was much theory but little way to test these theories outside of a simulation. For example, it is terribly difficult (or impossible) to prove that certain particles even exist, let alone predict how they will behave, but our prevailing theories presuppose their existence. “With particle acceleration, we are able to sometimes identify surrounding particles that belay the existence of what we “know” we are looking for, and sometimes for a brief moment even actually identify the particle itself before it decays or changes form.”

Thanks to the LHC, scientists were able to identify the top quark as well as the Higgs Boson, or “God particle.” Both discoveries quite literally opened the door to a whole new world of understanding of our cosmos. Particle acceleration allows us to open up the testing ground to the basic fundamental nature of matter and the universe itself.

“I really do not think there are those twirling their mustaches [at CERN], waiting to see if a black hole swallows the planet,” added Sofia.

Meanwhile, the mainstream media insists there is no evidence that scientists at CERN are engaged in anything other than “scientific-related activities” — whatever that means in the era of Scientism. 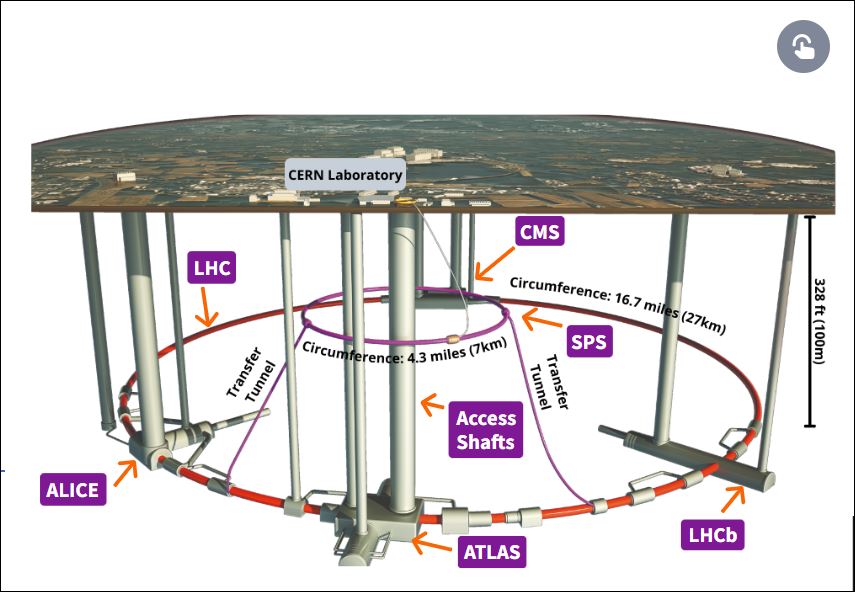 Black Holes And Portals to Hell?

Mustachioed villains aside, many do not trust CERN. As far as black holes go, two particles can make a minuscule black hole (“micro black hole”) if they collide with an energy above the fundamental limit.

“The prevailing theory of gravity (Einstein’s theory of general relativity) does not predict that a black hole can actually be made this way, despite computer simulations and theories, and any physicist worth his salt will tell you it’s impossible,” adds Sofia. “… It would require a total abandonment of physics, quantum field mechanics and frankly, logic.”

Yet CERN admits their collider could produce black holes, just not the type that you’re thinking of in space that would diminish humanity. On its official website, CERN says that the creation of black holes at the Large Hadron Collider (LHC) is “very unlikely.” But while the LHC will not generate black holes in the cosmological sense, it is possible that it may form “tiny quantum black holes.”

According to a website by the 2011 Hollywood movie Demons and Angels, they say such a black hole would harmlessly decay back into ordinary particles. CERN, which partnered with Ron Howard, adds that the observation of such an event would be thrilling in terms of our understanding of the universe, but it “presents no danger” and “would be perfectly safe.”

They claim there is no reason for conCERN. The black holes would allow physicists to learn more about gravity, the force which causes mutual attraction between all things that have mass or energy. The creation of a black hole at the LHC would confirm theories that our universe is not four-dimensional (3 space plus 1-time dimensions) but indeed hosts other dimensions.

If CERN admits there are dimensions beyond four (there are), how do we know the black holes decay or don’t vanish somewhere else? And, if their man-made magnetic fields are roughly 200,000 times stronger than that of the planet, how do we know for certain that there are no repercussions — negative or otherwise?

According to research brought forth by Frank Jacob, CERN is trying to penetrate through the 11th dimension. Jacob, an award-winning independent filmmaker who just released a three-part, deep-dive webinar exploring the history of Project Looking Glass, says scientists determined that slightly more energy is needed to create mini-black holes at the LHC than previously thought. Until now, the LHC has searched for mini-black holes with energy levels below 5.3 TeV. According to “gravity’s rainbow theory,” this energy is too low. According to Cern’s Mir Faizal, instead, the model predicts that black holes can form at energy levels of at least 9.5 TeC in six dimensions and 11.9 TeV in ten dimensions. Since the LHC is designed to reach 14 TeV in six dimensions and 11.9 TeV in the tenth dimension. Since the LHC is designed to reach 14 TeV in future runs, this predicted energy requirement should be accessible for black hole production.”

I am admittedly not a scientist, but wonder how this impacts planet Earth?

In 2008, a lawsuit was filed against CERN for endangering humans. The suit mentioned the black holes.  However, CERN is a sovereign entity outside any court’s jurisdiction, making them ultimately untouchable. Even Stephen Hawking left CERN because of their shenanigans.  “I am an atheist but … The Hadron Collider could open a gateway to HELL”,  Hawking once said.

“The globalists believe only in rocks, atoms, and molecules, no soul. That’s why they want to play God,” adds Jacob. “They [globalists] figure it’s their right to take the power. In some ways, they are much more aligned than the ‘new agers’, actually. They know what they want and where they are going. We can learn from that.”

I personally know I don’t want a soul-less future. Are we to spend a billion dollars a year for an orbital motorway that is ‘super safe’ or a space warp wormhole portal into alternate universes? According to a strange text, Sergio Bertolucci, Director for Research and Scientific Computing at CERN, claims “the LHC says that the titanic machine may possibly create or discover previously unimagined scientific phenomena, or ‘unknown unknowns’ – for instance ‘an extra dimension.’ Out of this door might come something, or we might send something through it.” Bertolucci adds that this ‘open door’ would be able to be held open for “a very tiny lapse of time, 10-26 seconds.” During this “infinitesimal” amount of time, they would be able to peer into this open door, either by getting something out of it or sending something into it. “Of course,” adds Bertolucci, “after this tiny moment the door would again shut, bringing us back to our ‘normal’ four-dimensional world … It would be a major leap in our vision of Nature, although of no practical use (for the time being, at least).”

The last time CERN was turned up to full capacity, strange things happened around the world. The Earth’s magnetosphere was affected, and an unexplained “spiral” was observed in Norway. Then on July 13, 2016, Dr. Edward Mantill, a CERN physicist, was found dead in his office from a self-inflicted gunshot wound.

“This is NOT what the machine was designed for, nor is it what the machine has been used for since its inception. CERN’s main purpose for building the Collider was to, well, it was to open a doorway.”

“Excellent. Who said the LHC was a waste of money? ®” — to echo the strange text that I found online.

Mantill had been researching a hidden code in the movement of the neutrinos from the north to the south magnetic poles. His colleague said Mantill hadn’t slept for days after he had allegedly given up his research and had shut himself off in his office. After a couple of days of not showing up for appointments, he was found in his office, fatally wounded. He had burned all of his research in his trash bin and his computer had been wiped clean of everything except one text file.

“Our universe is but one page in a large book. Think of a closed book sitting on a table: you see each page stacked on top of one another, bound by the spine and sandwiched between the two covers. Our universe is but one page in a vast and all-encompassing book. And our page is certainly not the only one with rich, in-depth thought and writing committed to it. Every page in the book represents a different dimension each with its own unique writing, own unique story, own unique way of isolating itself from the other pages. No page was to interact with the other, just as no ink bleeds from one page to another in a standard book. Each page is a universe unto itself.”

But is Mantill even real? When I searched for more about this man, nothing existed about him online. Was it because he was fictional or because the Ministry of Truth had scrubbed his existence? I mean, CERN created the Internet; I am sure they can digitally assassinate someone if they so wish. I even found an IMDB post suggesting he was fabricated.

Although Jacob had never heard of Mantill, he says his final words are ‘totally on the money.’ “If this is fiction, it is very eery. I know of a physicist who came forward in 2019 with info about the true goings-on in CERN. That scientist was found dead two weeks after.”

Mantill discussed how the new synthetic humans would be able to jump time, a transhumanist agenda, and that the human species was in store for a Great Reset of an explosive kind unless we wised up.

Adds Jacob, CERN is already creating explosions in energy that are affecting the Schumann resonances.

Mother Earth’s natural heartbeat rhythm is the frequency of 7.83 Hz, also known as the “Schumann Resonance”. A 7.83 Hz frequency is an alpha/theta brainwave frequency in the human brain. Nikola Tesla remarked that our entire biological system, the brain, and the earth itself work on the same frequencies. Schumann frequencies are controlled by reflection levels.  If you maintain that CERN would have no impact on our earth’s hum, consider the inconceivable energies the collider is releasing.  Dieter Boers who has been studying the Schumann Resonance for 40 years says that while it sounds whacky, it’s physically possible. Listen to Frank Jacob and Boers explore how quantum computers and HAARP may also be interacting with CERN.

Meanwhile, 2029 seems to be a key year to complete certain plans.  Jacob thinks the timetable is accelerating. Our collective consciousness and how we participate now will have an impact on creating the future.

For more on CERN check out: