Until recently, the concept of mandatory and mass vaccination has been only a worrisome possibility. Vaccination laws are passed and monitored at the state level, not at the federal level. But while the country was still struggling to recover from the events of September 11, 2001, and the bioterrorism scares of smallpox and anthrax threats, the groundwork to make vaccines mandatory began to change in 2003, during President George W. Bush’s State of the Union Address. On that fateful night, Bush revealed the creation of Project BioShield, a comprehensive effort to develop and make available modern, effective drugs and vaccines to protect against attack by biological and chemical weapons.

As sweeping as those plans may seem, the legislation failed to include key provisions sought by the drug companies. Most importantly, complete liability protection for all of their bioterrorism products.

During 2003 and 2004, any bills that were introduced by both the House and the Senate attempting to secure complete liability protection for the industry were done through federal law. In 2005 alone, 13 bills were introduced. One such bill, The Biodefense and Pandemic Vaccine and Drug Development Act of 2005, was gaining traction.

Introduced as S. 1873 by Senators Bill Frist (R-TN) and Richard Burr (R-NC), its purpose, according to Burr’s news release, was to “create a partnership between the government and private corporations by rapidly developing effective medical drugs and vaccines to protect the United States from deliberate, accidental, and natural incidents involving biological pathogens.”

Nicknamed BioShield II, the bill planned to give unprecedented advantages to the industry and remove or severely weaken all of the safeguards that prevented dangerous vaccines, drugs, and medical devices from reaching consumers. S. 1873 was accelerated through the Senate Health, Education, Labor, and Pensions (HELP) Committee, without hearings.

Public outrage began almost immediately. Websites, news outlets, and nationwide radio hosts were exposing the unbelievable benefits the bill would convey to the drug companies. Dozens of activist groups representing many thousands of constituents rallied a campaign to notify Congress of their dissatisfaction with S.1873. Faxes, emails, and phone calls left message after message opposing the carte blanche promises drugmakers set out to receive. Because the outcry against S.1873 was so strong, the possibility of its passage was bleak.

To circumvent this outrage, Senate Majority Leader Bill Frist forced the attachment of a shortened version int HR 2863, the 2006 Department of Defense Appropriations Bill, literally at the eleventh hour. Called Division E—Public Readiness and Emergency Preparedness Act, Frist’s addendum added 40 pages to an existing 423-page bill on December 17, 2005 at 11:20 pm, well after the House Appropriation Committee members had signed off, and most had gone home. Soon referred to as the PREP Act, it gave sweeping and unprecedented immunity to drug companies for emergency products.

The PREP Act provides complete immunity from liability for any loss relating to or resulting from, any product used to prevent or treat illness during a public health emergency. The immunity applies to entities and individuals involved in the development, manufacture, testing, distribution, administration, and use of medical countermeasures described in a Declaration. The only statutory exception to this immunity is for actions or failures to act that constitute “willful misconduct.” And as we will see, even willful misconduct may not be punished. For a full explanation of the scope of the Act, go here.

Representative Dave Obey (D-WI), Ranking Member of the House Appropriations Committee made the following statement on the floor of the House on December 22, 2005:

After the [Committee] finished at 6 p.m., Senator Frist (R-TN) marched over to the House side of the Capitol. He insisted 40 pages of legislation that had never been seen by Conferees be attached to the bill.
Speaker Dennis Hastert (R-IL) joined Frist’s insistence and without a vote of the Conferees, the legislation was unilaterally and arrogantly inserted into the bill. [This was] a blatantly abusive power-play by two of the most powerful men in Congress.
Rep. Obey’s full rebuttal – no longer available. You can read it here:
(

Passed in, Senator Frist (a medical doctor) handed the drug companies (a special interest group) more immunity than any bill that has ever been passed by Congress. The legislation provides at least four sweeping provisions:

In simple terms, if a claim is filed by a plaintiff it can only go forward if the injured party can prove that the company performed an act of willful misconduct. In other words, the injured party would have to prove the vaccine maker created a product that intentionally caused them harm.

Wasting no time, the Secretary of HHS, Alex Azar and the Assistant Secretary for Preparedness and Response Robert P. Kadlec, MD, MTM&H, MS, issued Notice of Declaration of National Emergency and published in the Federal Register on March 17, 2020 (Vol. 85, No. 52). The Declaration was effective as of February 4, 2020. By declaring a national emergency for the SARS-CoV-19 virus and COVID-19, the Secretary evoked the PREP Act “to provide liability immunity for activities related to medical countermeasures against COVID–19.”

Once this new, experimental COVID-19 vaccine is deemed to be a “covered countermeasure” there will be no going back. How can an experimental vaccine exist to protect from a virus that little is known about? Can you think of a worse-case outcome for many? The mainstream media is conditioning people to anticipate and even beg for this vaccine. It’s all part of the Plan.

The Time for Mass Vaccination in Adults Has Arrived

The National Vaccine Plan (NVP) for adults was released in February 2010. It lays out the strategy to vaccinate all adults with all approved vaccines and “any vaccine that is approved, now and in the future.”

The plan established four key goals. Each goal has objectives and strategies to guide implementation through 2020:

Let’s look at a little closer at what the Plan has to say about Goal #3:

All forms of media and communication continually remind the general public that a “vaccine for the virus that causes COVID-19 is on the way” and “it’s coming soon.” The implied message is to anticipate it, wait for it and then, as soon as it arrives, go get your vaccine. The listener’s subconscious is being prepared to demand to be vaccinated.

What Can You Do To Stop Mass Vaccination

I view most current events through the lens of history. As I wrote in Part 1 of this series, we’re seeing a repeat of what happened after 911. Only a few weeks after the towers came down in NYC, the draconian Patriot Act was passed into law on October 26, 2011. Now, within a few weeks of the outbreak of a coronavirus, a virus we don’t know much about or how long it will cause serious illness, the world has implemented draconian, stay-home “social distancing” rules. Even this phrase has psychological implications. They didn’t call it “physical distancing” but “social distancing,” a way to separate us at a time we should all be coming together.

How serious is the risk from this pathogen? On the one hand, we hear that 80% of patients experience a mild form of the illness, which can include a fever and pneumonia, and many of these cases require little to no medical intervention. On the other, we hear that 200,000 to 2 million may die in the U.S. alone. Which is it? Are we really so afraid of this pathogen that we’ve shut down the world? Are we so afraid of contracting this infection that we’re anticipating—even looking forward to—the development of a vaccine that will be deemed a covered countermeasure and have no liability, even if it injures or kills many and protects no one? 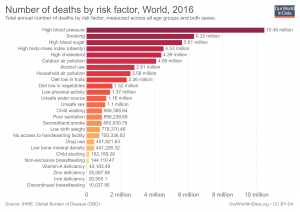 Look at this chart closely (click here to enlarge). This graphic from 2016 distributes the number of deaths by health risk factors throughout the entire world. It shows what people die from WITHOUT an infection by a rogue virus.

The bottom line is most die from poor nutrition and conditions marked by high inflammation.

Is it any wonder that these people have the highest risk of serious illness IF they become infected?

Perhaps during this forced global shut own one of the most important things you can do is use the time to evaluate all the areas of your life: your physical health, your mental health and your spiritual health and relationship with God. Clean out some closets and finish a few projects you always wished you had time to do. Read—or write —the book that has been calling you forever. Eat better. Exercise more. Lose some weight. Catch up on your sleep. Play with your kids. Reconnect with your significant other.

Perhaps God has put the entire world into Full Stop so we can meditate and reflect, taking time to course-correct toward what is really most important. Whenever I find myself feeling anxious about the future and the uncertainties of what is going on, I focus on this verse from the Bible: Psalms 46:10 – “Be still and know I am God.” If you can connect with that idea, you’ll be much more optimistic, and much less anxious, about the future.

Dr. Sherri Tenpenny is an osteopathic medical doctor, board-certified in three specialties. She is the founder of Tenpenny Integrative Medical Center, a medical clinic located near Cleveland, Ohio. Her company, Courses4Mastery.com provides online education and training regarding all aspects of vaccines and vaccination.

Dr. Tenpenny has invested nearly 20 years and more than 40,000 hours documenting and exposing the problems associated with vaccines. As an internationally known speaker and author, her many articles have been translated into at least 15 languages. She is a frequent guest on radio and TV to share her knowledge and educate parents on why they should Just.Say.No. to vaccines.