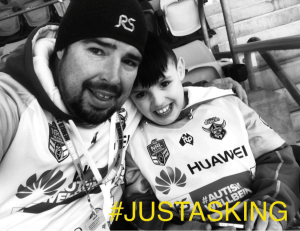 Michael Simms is the Aussie activist who started the GoFundMe Campaign to free Edwin Tamasese, the hero healer of Samoa. Edwin saved many lives during the measles outbreak by giving the people high doses of vitamins A and C. He was arrested because of a comment against the government vaccination policy on social media.

I interviewed Michael Simms via e-mail** to find out more from someone who is actually in Samoa, watching first hand what is happening. Here is what he had to say.

Q – Tell me more about you. How did you get involved with Edwin and the fight to help the children.

A- I’m a 38-year old Disability Worker from Canberra, Australia. I have Samoan and Indigenous ancestors. In my profession, I had heard many stories from parents who claim their child was normal, and vaccines changed them. All these people continued to vaccinate except for one case where the doctor listed “no more vaccines.” My son is also a vaccine-injured child. I have been a strong advocate online about the dangers of vaccines and am continually studying every bit of information that comes out, being it pro and against vaccines. I don’t remember the exact post, but Edwin turned up on my Facebook page. I asked him about Samoa, I had posted some information regarding Dr. Archie Kalokerinos, and Edwin said [what he was doing] was very similar to what Dr. Archie was saying. I then looked further into the story and what was going on. I organized people from the USA and NZ to get in touch with Edwin regarding sending him vitamins. When Ed was arrested, I blamed myself a lot for this. I wasn’t the only one to blame, but a few of us spread Edwin’s cause very far, and that is what brought so much attention and heat to him. Many Samoans knew I was following the story closely, and they suggested I started the GoFundMe campaign. Since I am not in Samoa, this would not bring any heat to them, so I started the campaign.

Q- How is Edwin doing? What are his plans?

A – Edwin is positive and hopeful for a good outcome when his case goes to court. Unable to discuss plans.

Q- What is the latest information about the outbreak in Samoa?

There are 5,080 cases according to the Government, although they stopped testing a long time ago. Eighty-five cases registered in the last 24 hours. Currently, 169 are in hospital, bringing the total number of hospitalizations to 1,697. The death toll is now 72 deaths.

The Government aims at having 100% vaccinated with 93% injected so far. That means vaccinating everyone no matter age or if they have had measles before.

Yes, some families are refusing the vaccine. Some hid out during the shutdown. There have also been reports of children running from the police when they arrived with vaccines. I would estimate that the remaining 7% are the ones refusing the vaccine, as they haven’t been vaccinated yet. The Prime Minister just stated that he looks forward to catching everyone who isn’t vaccinated yet. Next week he is passing a law to make it compulsory to be vaccinated to attend school for all school-aged children.

Q- Do you anticipate harsher measures taken by the Government to force families who are refusing vaccination into compliance and quenching dissent?

The government has now put in further restrictions on the people of Samoa. The government will be requesting the people to submit to physical examinations. If you refuse it, you can be fined $200, or be jailed and forced into compliance. This is a way to prevent people from seeing healers. No longer are they able to seek their own alternatives; they are making it illegal to do so. Anyone visiting someone like Edwin will be fined $200 a day until caught. They will be charged and forced to stay in a hospital until deemed fit to leave. If they leave hospital prior to discharge, they will be fined $200 per day until they are caught.

At present there doesn’t seem to be any restrictions on who they can do this to. If they request a medical examination from you , then you must show up. We also don’t know at this point if that means they can forcibly vaccinate you while you are there.

Here is the link for the official public notice.

Q – How many are real cases of measles?

A- When testing started, it was approximately 40% of cases. That was the D8 strain. The other 60% came back as not measles. No word was ever given to what the remaining 60% of people had. Once the Government reported it as an outbreak, testing stopped.

Q- Are the official statistics reliable?

A-Highly unlikely. There has been NO disclosure of the vaccine history of patients. No idea how many vaccinated people are getting measles. Note that the cases spiked up when they ramped up the vaccinations.

Q- What is the political environment in Samoa?

A-Samoa is still under the 3rd world category, and the Government relies heavily on aid from around the globe to combat the many health issues Samoans are facing.

The pro-vax propaganda is now overruling us, and it is currently illegal to correct it publicly. You speak out. You get sent to jail.

Q – How much support from the people do “you guys” have?

A- We have a lot of support around the world, a lot. In Samoa, the people are frightened. The pro-health choice people are usually young women and families. They can often feel pressured by their elders and leaders. Locally, once people are known publicly as anti-vax, they lose business and work.

Q – How many children do you estimate Edwin has helped to recover?

Q – Is there anyone taking over Edwin’s job of helping the children with the vitamins? Are there still packs of vitamins arriving in Samoa?

A – I can not comment on the future. Yes, the packs of vitamins are still arriving in Samoa.

Q- Before the vaccination campaign, how did the people of Samoa treat the measles when it occurred? Were fatalities common?

A-Mortality rate from measles was never this high in the past. Anecdotally old folks remember measles being generally a mild disease. The CEO of the Ministry of Health stated on national news that they don’t recall any deaths from the 1985 outbreak of over 1000 cases. The present outbreak has, so far, about 14 deaths per 1000 cases.

Q- I noticed that you changed your profile picture on FB to read that the Queensland police were monitoring the profile. How did that happen?

As the GoFundMe was being reported by various pro-vax pages and all their members, with my photos and details being spread far and wide around that community, I received many threatening and aggressive messages. That community legitimately wants us dead. People advised me to put up that [a different photo] to scare trolls from my account. If they thought it was monitored, they would fear sending any further messages. At that stage, after they removed the GoFundMe, I had weeks of sleepless nights and thousands of messages and comments from trolls and pro-vaxers. I needed a day off. The 24 hours with the new profile picture got me some space and some sanity for a day. When I say pro-vaxers, I don’t mean someone who vaccinates, but these people that want you and your children dead. They are on another level. They also had their own GoFundMe to buy more vaccines for Samoa even though UNICEF had already donated more than enough.

Q – What would you like the people to know about this epidemic and the situation in Samoa?

Edwin’s protocol needs a further endorsement from qualified health professionals. The use of a fever reducer needs to be appropriately vilified and held responsible for the high death toll.

Some hospitals claimed they didn’t have any vaccines and that they were stolen.

Clinics were selling vaccines that should be free. Other clinics were shut down for not being authorized vaccinators.

The Government destroyed vaccines saying they were not appropriately refrigerated.

The WHO stated there was no evidence to show that Edwin’s treatment worked, yet their site states that Vitamin A should be used to treat measles. After numerous papers shared the same story about Edwin peddling alternative cures like vitamins, UNICEF sent vitamins. We have evidence that people getting treated in hospitals were still not being treated with the vitamins but treated with various antibiotics, antifungals, and paracetamol.

And simply put, this is what happens when a nation loses natural herd and passive immunity.

Q- How can we continue to help?

We tried our best to finish this interview with a video of a mother whose child was cured by Edwin but, unfortunately, that was not possible because she, like all Samoans, is terrified and fears to be recorded on camera.

This weekend, it was announced that parents of the children who have been healed by Edwin fear they will be forced into physical examinations, isolation, and vaccination, even though their children had the measles.

It is a desperate situation, and one with despair.

Correction: The last paragraph of this email correspondence, before editing, said the following: [We apologize for any confusion.]

“With the announcement of this weekend, parents of the children who have been healed by Edwin fear they will be forced into physical examinations,  isolation and vaccination, even though their children had the measles.”

**The interview questions and responses have undergone very light editing for improved readability.

Heather Simpson is a Canadian journalist who has been dedicated to researching, writing and bringing awareness to some of the most important issues of our time.  For the past 6 years, she has been involved in environmental, vaccine choice and human rights activism.  She is the mother of a vaccine-injured teenager.  Since the realization of her daughter’s injury, she has devoted her time to continued researching vaccines and wellness. With this knowledge and experience, she is motivated to share and educate others about the risks, side effects and real dangers associated with vaccines.