In the previous section, we explored the dangers of the spike protein. Here we explore the mRNA.

The CoV injections are considered gene therapy whether they are DNA or mRNA-based treatments. Recall that Stefan Oelrich, president of Bayer’s Pharmaceuticals Division, said that the mRNA shots are ‘gene therapy,’ which were marketed as ‘vaccines’ to gain public trust.

“mRNA is short for one type of RNA existing in our cells, called messenger RNA. RNA is material carrying a set of instructions for the body to make the specific protein encoded by those instructions.”

The technology is described in a paid article on CNBC, an advertorial, as a “groundbreaking biotechnology some 30 years in the making.”

To note, large profits are expected to be made from CoV gene therapy injections:

“Pfizer expects to make three billion shots in 2021, enough for two doses for 1.5 billion people. It will make $26 billion in vaccine sales in 2021, which would make it the biggest-selling medicine ever.”

To be clear, when the mRNA gene therapy treatment was designed against the SARS-CoV-2 virus, scientists created a synthetic mRNA sequence, modified from the wild-type viral sequence. This was in order to make it more difficult for the body to break down the mRNA and it means it’s not natural. But in the inverted world of Pharmaceia, aka sorcery that is Rockefeller medicine, the immune system is ill-equipped and needs this experimental jab.

According to Dr. Michael Palmer, MD, and Sucharit Bhakdi, MD.

“The Pfizer and Moderna mRNA vaccines consist of a synthetic messenger RNA (mRNA) that encodes the SARS-CoV-2 “spike protein, which normally is found on the surface of the [SARS-CoV-2] coronavirus particles.”

Case in point, take this passage from the CNBC advertorial paid for by Pfizer:

“Similarly, if a person is exposed to the virus, the body’s immune system will also recognize it and respond. One important difference is that the vaccine does not cause disease.”

“The vaccine does not cause disease?”  That is a BLATANT LIE. The vaccine definitely doesn’t provide protection from getting the virus, yet it was sold with the promise that it will save you from death. Another lie.

The adverse reactions and ‘breakthrough’ infection rate would suggest that is not true – Pfizer’s clinical trial data also shows that prevention of disease is only a goal, not the reality of the CoV gene treatments.

“The vaccines are not only being celebrated as a first for mRNA technology, but also a milestone for the nanoparticle field.”

1.1 How the mRNA COVID vaccines work. 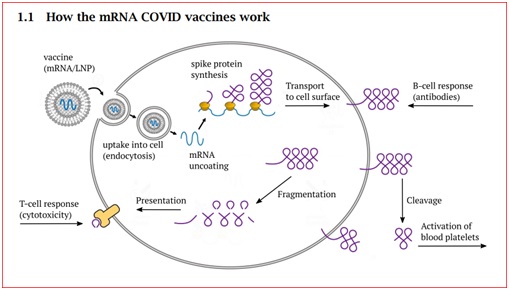 The mRNA is protected by a lipid nanoparticle coating which also helps it enter a cell membrane where the mRNA will then be used as a pattern for the cell to replicate the modified spike protein. It is then placed on the cell surface where immune cells will see it and form antibodies against it. The antibodies will be either neutralizing ones that will be protective against infection (but a risk to the cell itself and any others that have added the modified spike protein to their surface) or non-neutralizing ones that would not protect against infection (but also would cause less cell death of any of the person’s cells that have had spike added to their surface).

The mRNA strands are large and negatively charged and can’t simply waltz across the protective lipid membranes of cells. Instead, free mRNA in the body would be quickly broken down by the person’s immune cells.

Prior to LNPs, this is what made lab experiments difficult and the delivery of mRNA to our cells impossible. Without these synthetic lipids, enzymes in the environment and in our bodies would be “quick to chop mRNA into pieces.”

“LNP development has been a headache, but without this packaging, mRNA vaccines would be nothing. “It is the unsung hero of the whole thing,” says Giuseppe Ciaramella, who was head of infectious diseases at Moderna from 2014 to 2018.”

“The devil is absolutely in the details as far as LNPs are concerned.” – Giuseppe Ciaramella, former head of infectious diseases, Moderna.

The issue with nanoparticles as a ‘treatment’ is the body’s immune cells are designed to identify and remove larger particles. Nanoparticles can escape our defense system.

The mRNA gene sequence is coated in a membrane made of a mixture of synthetic and natural lipids, forming Lipid Nanoparticles or LNPs. One type can have a neutral charge in the bloodstream and a positive charge once in a cell’s interior – an ionizable cationic lipid.

“The ionizable cationic lipid is the linchpin of a nanoparticle.”

The pegylated lipids include graphene oxide which is very stable and the body’s enzymes can not break it down. The pegylated lipid is used in other products and has been known to cause allergic reactions. For purposes of the CoV injections, it is used to stabilize the Lipid Nanoparticles and make them more stable, and less likely to be broken down before entering a cell.

The membrane coating protects the mRNA once it is in the body as it normally would be broken down quickly if found outside of a cell. The NLP carrier membrane lipids also help the mRNA enter the human cells because one lipid can have a positive charge (cationic) which helps open the cell membrane: “ionizable lipids that are positively charged at an acidic pH but neutral in the blood.” The ionizable synthetic lipid ALC-0315 used in the Pfizer LNPs, was first described in a patent application by Acuitas Therapeutics in 2017.

“There are no cationic lipids in nature,’” remarks University of British Columbia nanoparticle scientist Pieter Cullis. “‘And we knew we couldn’t use permanently positively charged lipids because they are so damn toxic.’”

“Positively charged lipids are inherently toxic, and companies struggled for years before landing on formulations that were safe and effective. When injected intravenously, the particles invariably accumulated in the liver, and delivery to other organs is still an obstacle.”

These newfangled fake “modern” LNPs can be traced back to work on simpler systems called liposomes, hollow lipid spheres often made of just two or three kinds of lipids. These synthetic, fake, and unnatural lipids have never been injected into human beings before. Reported cell damage is due to chemical toxicity, mediated most likely by the cationic (positively charged ion) lipid components of the LNPs.

According to Dr. Peter McCullough, “Now there are pre-clinical studies suggesting the lipid nanoparticles actually go right into the heart.”

Thousands of these four components encapsulate the mRNA, shield it from “destructive” enzymes (which are really just doing their job), and shuttle it into cells or mitochondria, where the mRNA is unloaded and used to make proteins. 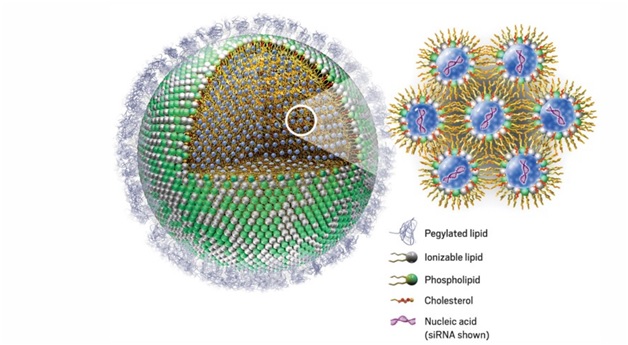 “A lipid nanoparticle (LNP) contains hundreds of small interfering RNA (siRNA) molecules, each surrounded by ionizable lipids, phospholipids, and cholesterol. The outside of the particle is coated in pegylated lipids. LNPs for messenger RNA (mRNA) is made with similar ingredients but contain only a few mRNA strands.”

“Although the concept seems simple, perfecting it [LNPs] was far from straightforward.”

An excerpt from a paper, published on April 30, 2021, by Palmer and Bhakdi, in the journal Circulation Research, also shows conclusively that COVID-19 is a vascular disease, demonstrating exactly how the SARS-CoV-2 virus damages and attacks the vascular system on a cellular level.

“After the vaccine has entered a cell, it initially finds itself enclosed by a membrane vesicle—a little bubble that was pinched off from the cell membrane. The subsequent accumulation of acid inside this bubble causes the lipids to be stripped off, and the mRNA to be released into the cytosol (the intracellular fluid); this release step is facilitated by the cationic lipid ALC-0315 (see later).” The mRNA then binds to ribosomes—the cell’s little protein factories—and induces the synthesis of the actual spike protein molecules. Most of the spike protein molecules will then be transported to the cell surface.