Pegylated lipids, in which polyethylene glycol (PEG) derived from petroleum strands are attached to lipid heads, have several functions in a nanoparticle. PEG helps control the particle size during formulation, prevents the particles from aggregating in storage, and initially shields the particles from being detected by immune system proteins in the body. 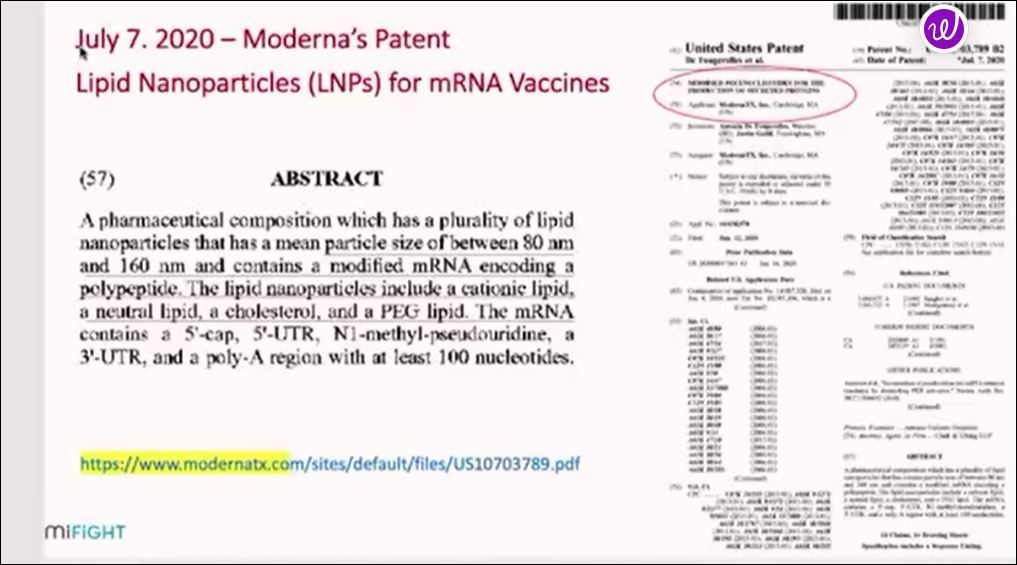 Basically, PEG, which is a toxic and inflammatory penetration enhancer used in too many products, allows the jab juice to enter every cell of the body and change the regulation of our own genes.

PEG is usually contaminated with two carcinogens: 1,4-dioxane and ethylene oxide. PEG is known to cause anaphylaxis; scientists hypothesize that some people could develop antibodies to PEG and that giving those individuals an injection of PEG-coated nanoparticles could further trigger an anaphylactic reaction.

PEG can also signal danger to your immune system and drive inflammatory processes that causedisease.

Another particularly grave concern is the slow elimination of toxic cationic fake lipids. This would result in cumulative toxicity in persons repeatedly injected with mRNA vaccines containing these lipids—be they directed against COVID-19, or any other pathogen or disease.

“There is a real possibility that cationic lipids will accumulate in the ovaries. The implied grave risk to female fertility demands the most urgent attention of the public and of the health authorities.”

Interestingly PEG not only allows the mRNA entry but when mixed with graphene oxide one is able to “image graphene and GO in a biological environment with the capability of quantitative analysis of intracellular concentration.”

Here for instance is literature on how PEGylated reduced graphene oxide is viewed as a “superior ssRNA delivery system†.” With PEG modification, the blood circulation of GO-PEG will be enhanced, as shown in other nanosystems.

“(…) Graphene has moved so much money, so many billions of euros that it is normal that it has been able to buy people. In this sense, it is clear to me that people have already swallowed, communicated, and lost any kind of conscience, even though they know that this is really going to provoke. What it is going to provoke, surely, is a hecatomb or an authentic genocide, which is what it intends. Somehow they have seen it as a golden opportunity for the Sustainable Development Goals of Agenda 2030,” as reported in Orwell City.

Big Pharma wants to deny that graphene oxide is included in their jabs, face masks, or PCR tests. This ingredient is not listed in a transparent way in the jabs as it’s a secret proprietary ingredient. Just like KFC doesn’t have to share its special recipe, neither does Big Pharma which is already operating with reckless impunity.

You’ve got to wonder why they have worked so hard to conceal the presence of graphene oxide in the vaccines?

Despite denials and even suspending my own Twitter account for  suggesting that graphene oxide is ‘the secret sauce,’ that will connect us to the Internet of Things, there is a study on how functionalized graphene oxide serves as a novel vaccine nano-adjuvant for “robust stimulation of cellular immunity.”

And here’s a PubMed paper on the progress of graphene oxide as a potential vaccine carrier and adjuvant. Here’s a patent.

“In the future, (GO) is expected to be introduced into vaccine research to improve the efficacy of vaccines,” wrote the NIH. They also detail the potential of graphene-based materials to combat COVID-19.

The Graphene Council also says they are working on “polymer nanoparticles with pulsatile release vaccine systems.”

“Our task is to make those ‘graphene helpers’ as efficient as possible,” said  Professor Kostya Novoselov in October 2020 – who, with Professor Andre Geim, was awarded the Nobel Prize for Physics for their work to isolate graphene in 2004. “I don’t think graphene is a panacea, but it holds a number of attractive characteristics and it definitely will be used – and, in fact, already is being used – to fight the virus, either in diagnostics or in protective gear or as an active ingredient.”

This study from the Polymer Journal shows how Graphene Oxide is successful for gene delivery, which is exactly what Moderna and Pfizer products claim to do. Furthermore, there are scientists that have examined some vials to show the presence of graphene oxide.

So what is graphene oxide?

With its multitude of astonishing properties, graphene oxide, actually discovered in 1859, earned the title of a “wonder material.” It is a one-atom-thick layer of carbon atoms arranged in a hexagonal lattice. It is the building block of Graphite (which is used, among other things, in pencil tips), but graphene is a remarkable substance on its own.

After isolating graphene from crystalline graphite, the European Union established the “Graphene Flagship,” which was a one Billion euro fund to appraise all research related to Graphene, and most of it was dedicated to the biomedical space.

Over the past few years, graphene and graphene-related materials (GRMs) have attracted huge attention from researchers due to their wide “spectrum properties such as high surface area, high electrical mobility and conductivity, excellent mechanical, electrochemical, and piezoelectric properties, and efficacy against microbes and viruses.” (Its 2D structure and fascinating chemical and physical attributes have created enormous interest in the field of electrochemistry.)

Turns out the graphene market skyrocketed through 2020, reaching 614.7 million. According to BCC Research‘s new report, “Graphene: Technologies, Applications, and Markets“, the global graphene-based product market value will grow to $67 million in 2015, and $675.1 million in 2020. That’s a 58.7% five-year compound annual growth rate (CAGR)

Graphene oxide is not only 150 times stronger than steel, it’s actually the strongest material ever measured. And, it’s also 1,000 times more conductive than copper, which means it uses less friction and produces less destructive heat than traditional wires.

Touted as an extremely diverse material, they can be combined with other elements (including gases and metals) to produce different materials with various superior properties. Researchers all over the world continue to constantly investigate and patent graphene to learn its various properties and possible applications, which include:

Are you a piece of hardware? Why are they putting graphene oxide in our bodies? Is it because it can arguably parlay and connect us with the Internet Of Things (I.O.T)?

Graphene oxide is the primary agent in what is called hydrogels and basically, when it’s subjected to electromagnetic radiation, it will self-assemble into larger nanotube structures. If they wrap at the right angle, the layer between the two graphene sheets actually traps electrons so that they’re not only conductive but superconductive. Here’s a study on Electromagnetism of Vaccinated Persons.

Incidentally and incredulously, AstraZenca, according to the Daily Mail, stated in early December that they uncovered what’s triggering the blood clots, the weakened cold virus that is used in that brand instead of the Lipid Nanoparticle coating:

“They found that the shell of the vector vaccine — the weakened cold virus used to teach cells how to neutralize Covid — sometimes acts like a magnet and attracts platelets, a protein found in the blood.”

“Scientists found the virus used in the jab attracts a protein in the blood, called platelet factor 4, like a ‘magnet’…“ 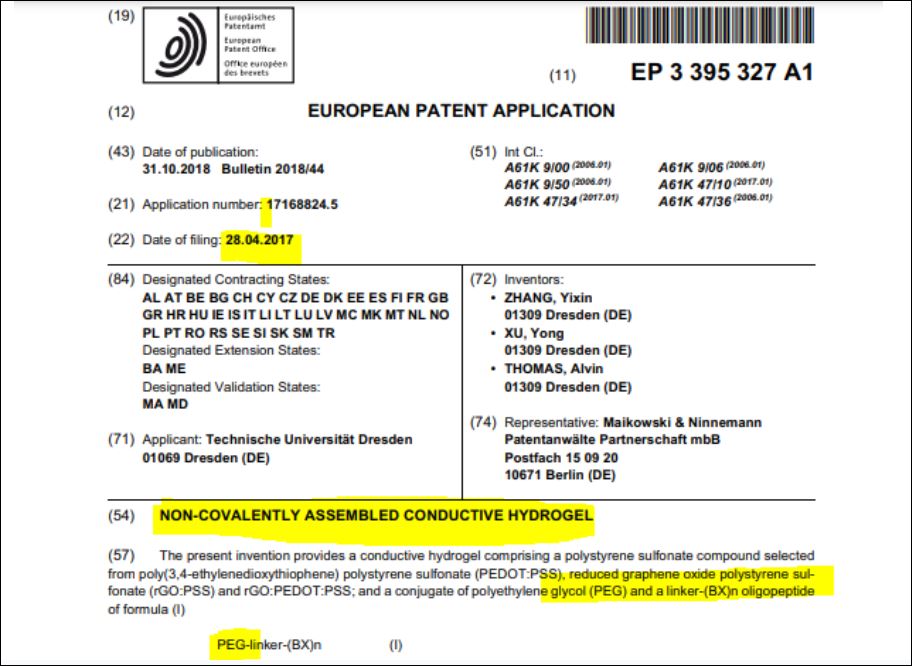 In blood, graphene sheets roll into tubes much like rolling a sheet of paper. This forms long structures with multiple layers. The rolls form a sandwich with an electron trap between the layers. Electrons in this zone are trapped but very weakly bound to the sheets above and below. Rolled structures form superconducting antennas that resonate when stimulated by electromagnetic radiation at any frequency with a wavelength correlating to an ordinal fraction of the antenna’s length.

In English, this translates to “Blood with graphene nanotubes is very vulnerable to radiation damage, especially from 5G.”

According to an NIH study:

“Due to its amphiphilic property, graphene oxide (GO) can achieve a variety of nanostructures with different morphologies (for example membranes, hydrogel, crumpled particles, hollow spheres, sack-cargo particles, Pickering emulsions, and so on) by self-assembly.“

Durable blood injury observed in the vaccinated, severe rouleau, and poor zeta potential can be explained by perpetual electromagnetic radiation poisoning, which is captured by these nanotube antennas.

The high-frequency signal used in 5G, 24-300 GHz, contains a minimum of 4x to 50x more energy relative to 4G, at 6 GHz. This high-frequency energy is much more readily absorbed by the nanotube structures.

When you consider electromagnetic radiation, the smaller the antenna, the higher the frequency of response; as an antenna gets longer, it becomes able to respond to lower and lower frequencies. So as the graphene circulates in the blood, it basically forms antennas, which increases the amount of unnatural radiation that gets converted into energy that hinders the blood. That is why the blood looks so radiation injured.

The internet of things, like 5G and so forth, are basically radio waves that interact with small antennas.

Consider that as early as August 2020, there were already talking about “swarms of robots so small they could be inserted via a hypodermic syringe.” Biotech loves that G.O. enhances uptake, upgrades pharmacokinetics, and aids in hematopathology.

The interactions of G.O. with biological molecules (DNA and proteins) are known to create cytotoxicity and have mainly been examined in animal experiments. Its phytotoxicity remains largely unexplored in the human body, therefore scientists suggested that biocompatibility must be considered.