With more than 1M views and at least that many comments and commentaries dispersed far and wide across the internet, the release of Dr. Bryan Ardis’ documentary “Watch the Water” on April 11, 2022, by Stew Peters followed by  a longer, 3-part interview by Mike Adams, has unleashed a firestorm of controversy.

I have been inundated with texts and emails asking questions and wondering about my thoughts on the material presented.  So, a response is in order.  While this is not the fruit of my research, Bryan is a dear friend and a solid researcher.  The information he presented raises some important questions that demand further investigation.

I do believe he could have made his case tighter and his arguments stronger if he had his presentation reviewed by an advisory board of sorts, consisting of other doctors and scientists, prior to its release.  Nonetheless, what he presented was a giant club and he used it to hammer home the reality of just how uncertain we really are regarding the ingredients of these untested and unapproved shots.

Whether or not snake venom is in these shots, a shocking truth has come to light: just how pervasive the use of snake venom is within pharmaceuticals. From some cursory research I have done, snake venom has been used medicinally and for healing ceremonies for many, many years.

For example, the venom of the Brazilian pit viper is used to make drugs to treat hypertension. Venom extracted from the rattlesnake and the saw-scaled viper has been used to treat heart conditions such as angina.

Because hemotoxins have anti-clotting properties, hemotoxins extracted from venom have been used to develop drugs to treat high blood pressure, heart attacks, and blood disorders. Similarly, extracted neurotoxins have been used in drugs to treat strokes and brain-related diseases such as Alzheimer’s disease. Other conditions that may be treated using snake venom include cancer and even erectile dysfunction, for which cobra venom is renowned. Source.

Mike Adams released a document that has all of the studies used by Dr. Ardis in his interview. For those who are interested, you can find it here.

Whether or not his presentation is air-tight, Dr. Ardis’ efforts have helped to wake up the fearful masses. He has further educated those who “still believe” the fear-based messages spewed worldwide every day by the Propaganda Machine. With the release of his information, millions more have come face-to-face with the depth of evil these satanic Luciferians are willing to go to eliminate humans and destroy humanity. 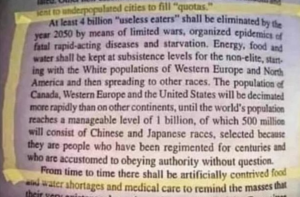 While this text apparently originated in a 1991 book, “Conspirator’s Hierarchy: The Story of The Committee of 300′ by Dr. John Coleman, it certainly reflects what has long been attributed to Henry Kissinger. In the book, The Final Days, Kissinger was quoted as saying, “The elderly are useless eaters.” The Georgia Guidestones are real and their population – or should I say, depopulation – agenda has been known and followed for years. Even though Klaus Schwab may not have actually written this paragraph in his book, if you’ve been following anything put out by the World Economic Forum (WEF) over the last few years, he certainly could have used similar language and innuendos in his book on the Great Reset.

I hope the ongoing releases from the WEF (we now see their plans for the tyranny they are), coupled with additional info put forth by Dr. Ardis and others, will once and for all expose and embarrass all the physicians, pastors, company CEOs, and government agents who have advocated for, even forced, their patients, congregations and employees to wear masks, to get repeated, worthless, dangerous testing and to be involuntarily subjected to this gene-altering, immuno-suppressive injection. These folks, their minons and their messagers are the real venom and snakes that need to be exposed, judged, punished and then, eliminated.

Those with eyes to see and ears to hear (Proverbs 20:12) are being readied for a spiritual battle of epic magnitude. During the last two years, we have only been able to chip away at the “spell” cast over the fearful sheep. Now that their brains have exploded with the ‘snake venom’ information, finally, humanity is beginning to question EVERYTHING COVID,

Remember this quote from the movie, “Law Abiding Citizen”?

Like the dawn of a new day, the satanic luciferins are being exposed more at every turn. They will soon be scorched by the full heat and intensity of the sun of justice. Or more accurately, they will be scorched for all eternity by the full glory of the Living Son of the Father.

If you have heard any of my talks or presentations since January of this year, you know I have been literally preaching that the only solution to all of this is a spiritual one. “You cannot find a physical solution to a spiritual problem.”  The answer will only be found in Jesus Christ. Specifically, choosing to accept the Gospel and actually walking with Jesus, in an intimate and personal relationship, not just giving lip service to believing in some generic, New-Agey “God” – or however you define “the Universe.”

All Vaccines Are Bioweapons

I’ve been putting out the following message and creating educational programs for more than 20 years:

All vaccines are, and always HAVE been bioweapons, poisoning children from birth, and now, even in utero.

Dr. Ardis’ message has been one more grenade used to expose the tsunami of ignorance practiced by well-meaning but ignorant doctors. Within this ever-widening gap of what was… and what needs to be… I see a New Approach to health and financial stability forming, like the phoenix rising from the ashes.

Quite frankly, going forward, I have neither time nor interest in proving or disproving the snake venom issue other than to say I don’t personally agree with the premise that “it’s in the water.”

That said, thank you, Dr. Bryan Ardis, for exploding one more layer of their spell. Full steam ahead. May God bless and protect you.

Dr. Sherri Tenpenny is an osteopathic medical doctor, board-certified in three specialties. She is the founder of Tenpenny Integrative Medical Center, a medical clinic located near Cleveland, Ohio. Her company, Courses4Mastery.com provides online education and training regarding all aspects of vaccines and vaccination. Her company, Choonadi, LLC, provides all writing, speaking and blogs and interviews can be found at https://www.drtenpenny.com/

Dr. Tenpenny has invested more than 20 years and more than 50,000 hours of personal time, documenting and exposing the problems associated with vaccines. As an internationally known speaker and author, her many articles have been translated into at least 18 languages. She is a frequent guest on radio, podcasts and TV interviews to share her knowledge and educate parents on why they should Just.Say.No. to vaccines. ALL of them.