As I asked in Part 1, what was Bill Gates/the Gates Foundation doing in Nigeria in 2017?

I didn’t have to go far to find the answer.

Before the monkeypox outbreak, Gates and billionaire philanthropist, Aliko Dangote, met with Nigeria’s officials, and subsequently declared that Nigeria was doomed to poverty, and was one of the most dangerous places to give birth in the world. The country was so poor that there were even some accounts of some parents trading their young children in for debt. 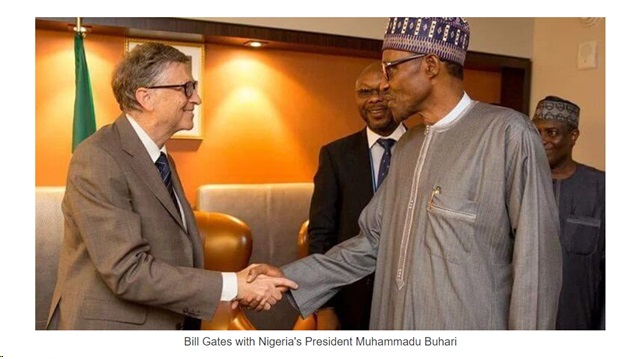 Fortunately, (read: sarcasm) Gates announced that there was hope given their abundant resources and their ‘huge population.’ Nigeria could still join the League of Nations and mingle with upper middle income people from China, Brazil, and Mexico. Quantum leaps depended on the choices made by the political leadership, and this involved reordering national priorities.

Unfortunately, only a few Nigerian leaders, such as Governor of Kaduna State Nasir El-Rufai, were wise and gutsy enough to brand Gates ‘a liar.’

Obianuju Ekeocha, a Nigerian-born biomedical scientist and founder of Culture of Life Africa, a UK-based pro-life group, argued on BBC’s Sunday Morning Live that the Gates Foundation’s push for contraception in Africa might be “an insidious way of moving forward their agenda of population control,” because they were opposed to the high number of children thought to be desirable in many African countries.

Ekeocha clarified that while family planning programs were not “bad in and of themselves,” the real problem was that billions of dollars were flowing into the country from the US and elsewhere to “tell African governments how to control their local populations.”

Incidentally, Nigeria has the second largest HIV population in the world. Officials began giving antiretroviral drugs regardless of side effects to HIV-infected patients engaging in unprotected sexual intercourse.

After meddling in reproduction services, Gates moved on to injections and the food supply. In a 2016 Gates Foundation press release, the Nigerian governors partnered with Gates, Dangote Foundation, and USAID to bring “life-saving vaccines to children.” 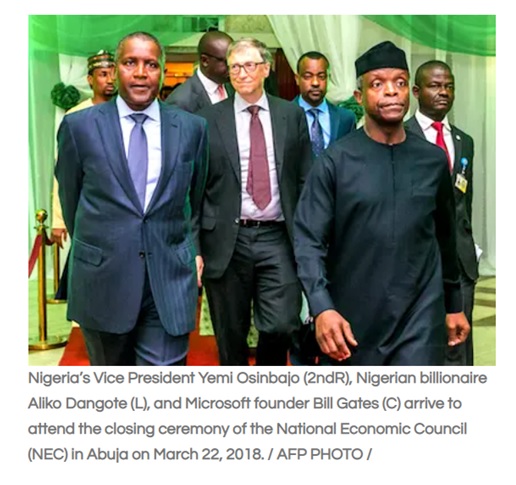 “The country now has an ambitious plan to introduce life-saving vaccines over the next several years, and today’s commitments will ensure we can get those vaccines to the children who need them most,” Muhammadu Buhari, the Nigerian President proclaimed.

In 2017, Gates mentioned on his website, GatesNotes, that Nigeria’s Dr. Akinwumi Adesina had won the World Food Prize. Despite growing up poor, Adesina went on to earn a Ph.D. in agricultural economics and then worked for the Rockefeller Foundation, which facilitated his rise to Nigeria’s minister of agriculture. He also served as Vice President of nonprofit Policy and Partnerships for the Alliance for a Green Revolution in Africa (AGRA).

Would you be surprised to learn the Bill & Melinda Gates and Rockefeller Foundation founded  AGRA   back in 2006?

Gates’ spent (laundered?) billions of dollars promoting and subsidizing commercial seeds and agrochemicals, but AGRA failed to fulfill its promises to alleviate hunger and to lift small-scale farmers out of poverty, according to a white paper published by the Tufts University Global Development and Environment Institute. According to Corey Digs, AGRA’s first-ever evaluation report published February 28, 2022 reveals their 15-year effort was a FAIL.

“Evaluators stated there were many deficiencies and AGRA’s reporting and monitoring data was weak… AGRA’s bold claims to ‘double yields and incomes for 30 million farming households by 2020’ was removed from their website in June 2020, following Tufts University’s findings that documented a 31% increase in hunger,” she writes in her report.

Bill Gates and his evil cohorts promised a revolution in Nigeria, but instead, they meddled in reproduction services, took over farming, issued genetically modified seeds, poisoned the soil, imploded the food supply, and started jabbing the people with poisonous vaccines.

The “Green Revolution” in Africa was never designed for the benefit of the people.

But wait, it gets worse.

In 2018, the Bill & Melinda Gates Foundation paid off Nigeria’s $76 million polio debt, which the country had acquired to combat its national polio epidemic. The Foundation approved the debt write-off after Nigeria met certain conditions, including the guarantee of more than 80 percent polio vaccination coverage in at least one round [of government-mandated vaccination] each year in very high-risk areas.

In the last decade, Bill Gates is reputed to have funneled an estimated $1.6b of his own “hard-earned” fortune into humanitarian causes in Nigeria, especially immunization of kids against polio with a view to helping to end the “nation’s shame as the world’s capital of the horrific yet preventable disease.”

In 2020, under the Rona Regime, Nigerian politicians proposed the “Nigeria Centre for Disease Control Bill” to replace the National Quarantine Act of 2004. This horrible piece of legislation – under the New World Order – is actually a blueprint for what is desired for the entire planet. The bill strips Nigerians of burial rituals, justifies arrest without a warrant, and makes non-compliance a crime. 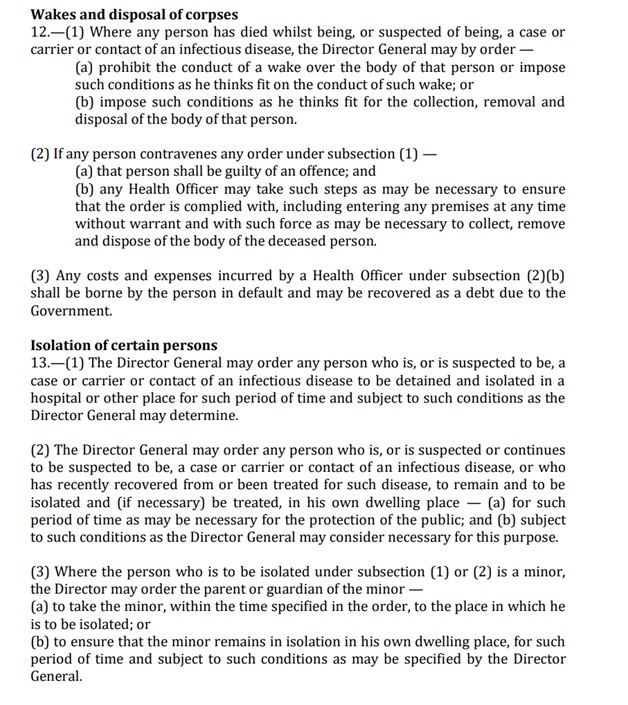 Passing the Bill in Nigeria

While the Senate had yet to review  the Bill for a second time back in 2020, the House version had already undergone the public hearing phase. Meanwhile, the Speaker of the House Of Representatives was accused of plagiarizing– almost WORD FOR WORD the draconian Singapore Infectious Diseases Act 1977, which had passed 43 years ago.  I was unable to find any information past 2020, online.

The Coalition of United Political Parties (CUPP), Nigeria’s opposition party, citing a “human intelligence report,” alleged that Gates offered Nigerian lawmakers $10 million for the “speedy passage” of the bill, which (on the surface) aimed to curb the spread of infectious diseases. Gates denied the accusations of any bribes, but for the record, he uses shame and bribery to drive vaccination rates.

Was the Nigeria Centre for Disease Control Bill a practice run to be used elsewhere in the world?

“The Next One WILL Get Their Attention”

Monkeypox was considered a rare disease caused by the monkeypox virus (MPXV). It was reportedly “discovered” in 1958 when outbreaks of a pox-like disease occurred in monkeys kept for research in a Rockefeller Foundation-funded lab in Copenhagen.

By the way, the Rockefeller Foundation also cultivated Zika in 1947, which I wrote about back in 2016.

According to rumors, gain-of-function research started as far back as 1961 in both the US and abroad to explore cross-transmissibility after scientists discovered that it could be transmitted via rodents. While I was unable to find anything to this effect, rodents are suspected of somehow playing a role in transmission. Little is known about rodent reservoir genomic diversity.

The first human case of monkeypox was recorded in 1970 in the Democratic Republic of the Congo (DRC), and since then, the infection has been reported in a number of central and western African countries. See The Tenpenny Report for a monkeypox timeline. 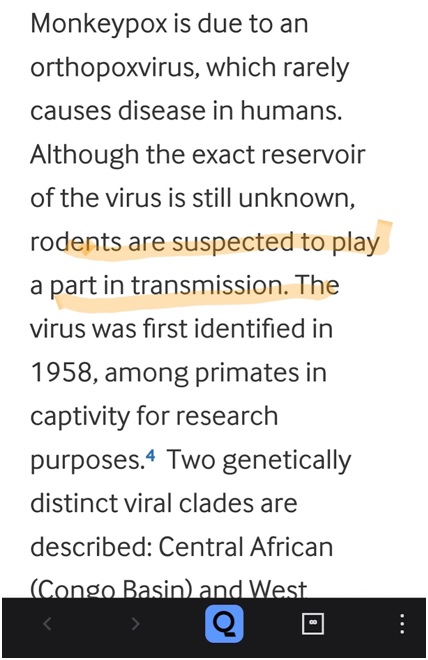 The Real Importance of Monkeypox

“The next one will get their attention.”

Do you remember when Billy Boy said this with his sideways creepy grin?

That’s the quote I thought of after reviewing ghastly pictures of monkeypox on genitals in The British Medical Journal (BMJ) published in July 2022. These were not re-hashed National Geographic-esque images of African children with pustules that the mainstream usually circulates.

“It’s the 1980s all over again,” James Grundvig of American Media Periscope recently told me. “Promiscuous youth are getting high, cavorting and then infecting one other.”

The first peer-reviewed study showed monkeypox is primarily transmitted through the sexual activity of gay and bisexual men with 41 percent also having HIV.

On May 19th, João Paulo Gomes, Ph.D., a researcher from the department of infectious diseases, and Dr. Doutor Ricardo Jorge of the Instituto Nacional de Saúde (INSA) in Lisbon, Portugal, posted the first draft genome sequence online on virological.org. “The determination of the genome sequence of the virus causing these infections will certainly contribute to a better understanding of the epidemiology, sources of infection, and transmission patterns,” wrote the authors. 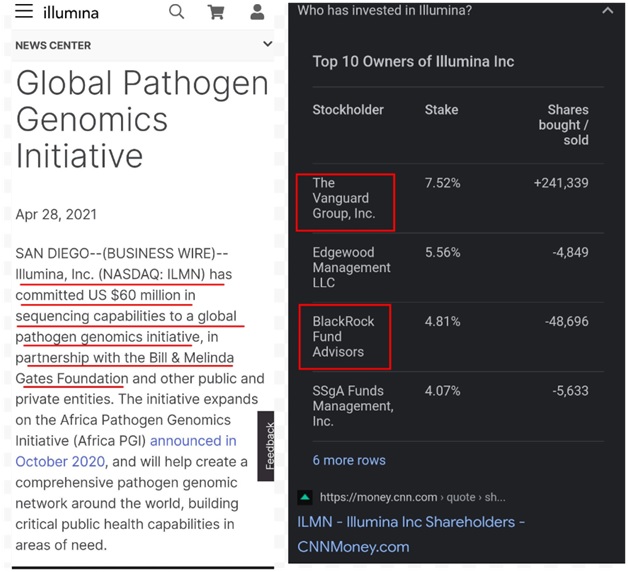 Echoing this point, Illumina CEO Francis deSouza told the press that sequencing the monkeypox virus is vital to developing vaccines, therapeutics, and diagnostics.

DeSouza added we need to widen global surveillance not only for supposed public health but for national defense “to monitor bioterrorist attacks that may be playing out.” Naturally, Illumina involves all the usual suspects – The Bill & Melinda Gates Foundation, The Vanguard Group, and Blackrock.