On Monday, July 27, a group of physicians called The Frontline Doctors met on the steps of the Supreme Court of the United States in Washington DC for a press conference, discussing their experience in treating patients with hydroxychloroquine (HCQ).

Shortly thereafter – but not before the video has received more than 70 million views on Brietbart livestream and 17 million viral shares – the hammer of Big Tech went to work, attempting to crush all evidence of the doctors’ compelling plea to make HCQ, an inexpensive and extremely effective medication, available to all. Big Tech – including Google, Apple, Facebook, Instagram, Twitter, YouTube, Vimeo and even the website host Squarespace – didn’t stop with only scraping the physicians’ press conference off the internet. No, they punished others for even TALKING about the press conference. Breitbart was censored for days and even Donald Trump, Jr. was put into Twitter jail for mentioning HCQ. 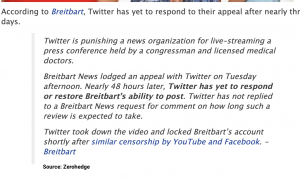 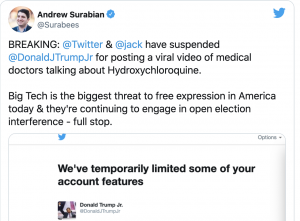 And then, a mere 48 hours after the press conference and censorship storm, (on Wednesday evening July 29), the State of Ohio Board of Pharmacy’s ruling (Rule 4729:5-5-21) that was written and approved on July 20, was published with a plan to go into effect following morning. This arbitrary rule prohibited doctors from prescribing and pharmacies from dispensing chloroquine or hydroxychloroquine “for the treatment or prevention of COVID-19” – unless the patient was enrolled in an institutional review board (IRB) qualified clinical trial.

The rule went further: All previous approvals for the use of these two medications were to be voided. Did that mean the thousands, if not tens of thousands, of patients across Ohio whose rheumatoid arthritis and other autoimmune conditions had been successfully treated for years with Plaquenil, the trade name for hydroxychloroquine, were going to be denied medication too?

While many doctors I know were scrambling to find a way to fight this rule, the next morning Ohio Governor Mike DeWine issued a written statement:

“The Board of Pharmacy and the State Medical Board of Ohio should revisit the [restrictive rule] issue, listen to the best medical science, and open the process up for comment and testimony from experts. I agree with the FDA commissioner, Stephan Hahn, who said the decision whether a person should take hydroxychloroquine should be made between a doctor and a patient.”

I personally thought DeWine was simply issuing a political statement to make him look more open-minded and perhaps more Republican and right-leaning. But low and behold, within a few hours, the Ohio Pharmacy board issued the following statement:

“The physician’s ability to exercise their professional, clinical judgment (including consideration of potential risks on a case-by-case basis) in the assessment and management of the medical needs of their patients.”

If a state pharmacy board, a governor and a state medical association can do a complete 180-degree turn-around, from banning a drug to freely using it, in less than 24 hours, I hope that anyone who is paying attention can FINALLY see that these rules and mandates have nothing to do with drug or patient safety, nothing to do with scientific evidence and nothing to do with effectiveness.

It is all purely about power and control.

Why are they fighting against HCQ so vehemently? If an inexpensive drug with a long history of safe use can treat and prevent the syndrome called COVID-19 caused by a virus called SARS-CoV2, it would completely upend the necessity of a coronavirus vaccine. All that money, all those plans and all that power-grabbing effort on the part of the globalists would be wasted. The Plandemic would be over and humanity would be free.

Without the Plandemic, the coordinated tracking databases being built to accommodate initiatives such as COVIPASS and Time Stamp would fade away. Time Stamp, first launched in 2018, is a total identity platform integrated into the GAVI-Mastercard “Wellness Pass.” It will house your digital vaccination records and also be linked to Mastercard’s click-to-play system. The system is powered by an AI (artificial intelligence) and machine learning technology called NuData. Trust Stamp intends to be the primary technology used by governments for contact tracing and used by law enforcement for surveillance and futuristic “predictive policing” – the implementation of the Thought Police.

For those who don’t know, or don’t remember, the concept of the Thought Police comes from the 1949 George Orwell novel, “1984.” The Thought Police, called the Thinkpol, were the secret police who were instructed to discover, apprehend and punish any person whose thoughts were unapproved by the government.

Thinkpol is eerily similar to present tense surveillance systems that use criminal psychology, informers [contact tracers], and cameras with microphones [ie. your iPhone]. Citizens are being monitored and those who challenge the status quo and the authority of Big Brother are starting to be arrested….is Room 101 next?

How did we get here?

It is remarkable that in a mere 100 days, a series of planned events and unified messages about hydroxychloroquine appeared across the US, Canada, Australia, NZ and most of western Europe. The message? A long-used generic and inexpensive drug called hydroxychloroquine is dangerous and should not be used to treat a potentially fatal disease, COVID-19, for which there are no reliable or otherwise “approved” treatments.

Even though hydroxychloroquine has been prescribed safely for 65 years and used successfully many millions of patients, the message was hammered home that the drug is safe for its other uses, but dangerous when used for Covid-19.  This doesn’t make sense, but it seems to have worked as doctors stopped using their critical-thinking skills and fell into lock-step compliance.

In the US, the “Never Trump” message morphed into “Never Hydroxychloroquine,” meaning,  the pandemic will be “Never Over” unless, of course, you are vaccinated.

Dr. Meryl Nass, a long-time friend and colleague, has put together a list of what has happened. The information, listed in no special order but loaded with active links, is written as though it is a “To Do” list to be carried out by those who are pulling the strings.  Many items on the list have already been completed.  One wonders what else they have up their collective sleeves to continue – and tighten – their goals for this Plandemic?

How to Control Both The Narrative and The Doctors

(The above section was reposted with permission from Dr. Meryl Nass. To read the additional 35+ ways the Plandemic was created to elimate the narrative about the use of HCQ, go here.)

Here are a few basic nutrients that I strongly recommend. You should be taking these every day for overall health and to support your immune system against any viral infection:

If you take at least these five nutrients, wash your hands, get plenty of sleep and exercise and eat as holistically as you can, your immune system will be supported and your risk of not only COVID-19 but other infections such as influenza should go down substantially.

Dr. Sherri Tenpenny is an osteopathic medical doctor, board-certified in three specialties. She is the founder of Tenpenny Integrative Medical Center, a medical clinic located near Cleveland, Ohio. Her company, Courses4Mastery.com provides online education and training regarding all aspects of vaccines and vaccination.

Dr. Tenpenny has invested nearly 20 years and more than 40,000 hours documenting and exposing the problems associated with vaccines. As an internationally known speaker and author, her many articles have been translated into at least 15 languages. She is a frequent guest on radio and TV to share her knowledge and educate parents on why they should Just.Say.No. to vaccines.

2 Comments on "Coronavirus Pt 5: Hydroxychloroquine and The Ohio Boomerang"