‘By 2030, we are going to be hybrids.’–Ray Kurzweil Director of Google Engineering

“Graphene has moved so much money, so many billions of euros that it is normal that it has been able to buy people. In this sense, it is clear to me that people have already swallowed, communicated, and lost any kind of conscience, even though they know that this is really going to provoke. What it is going to provoke, surely, is a hecatomb or an authentic genocide, which is what it intends. Somehow they have seen it as a golden opportunity for the Sustainable Development Goals of Agenda 2030.”

Was performer Travis Scott’s Astroworld Festival a Luciferian sacrificial blood ritual and a successful test run? Before I explain how graphene oxide in the dangerous jabs could have very well played a significant role in this November 5 experiment, I fully realize well how insane a determination of devil worship sounds.

However, consider that pharmaceia (sorcery) has indirectly killed millions since Rockefeller medicine was instituted after the 1910 Flexner Report. US annual estimates now amount to roughly  987,000 medically-caused (iatrogenic) deaths , a rate that surpasses both heart disease and cancer as leading causes of death.

A myriad of examples demonstrates the orchestrated evil in this entire plandemic, including (1) the myth of the masks, (2) knowingly upping the cycle threshold (CT value) on the nondiagnostic PCR “test” to accumulate tons of false positives and scare people with big numbers, (3) incentivizing doctors to the tune of $39,000 per patient to abandon the Hippocratic oath in lieu of deadly ventilators, and (4) consciously telling people that aspirin suddenly can’t be used as an anticoagulating agent.

“We was like in f**kin’ hell bro, it was like we were in a concert in hell. We couldn’t breathe,” said an Astroworld concert attendee in a now highly-circulated video. He saw at least 100 people passed out, “turning black and blue. That was some demonic shit.”

He also claimed he personally saw at least 10 people who had died.

However, the media told the public that there were hundreds of injuries and that only 8 to 11 of the 50,000 attendees had their hearts stop due to being crushed by the crowd, including a nine-year-old boy. But did you know that Astroworld’s team of 70 medics stated they had the “impossible job” of treating 11 cardiac arrests at once?

Really? 11 SIMULTANEOUS heart attacks? Doesn’t that seem just a bit odd? (And those are just the deaths we know about.) Is this a new normal? More than 125 fans have filed $750 million in lawsuits against Travis Scott over the Astroworld tragedy. Most causes of death have yet to be confirmed because, at the time of this writing, autopsies are still being conducted.

Meanwhile, during a press conference, Houston police chief Troy Finner said that according to medical staff who treated a security officer, “He was reaching over to restrain or grab a citizen and he felt a prick in his neck.” He was then administered Narcan, a medication used for emergency treatment of suspected opioid overdose.

Finner said no stones would be left unturned. Let’s see about that.

Given the abundance of tries (truth plus lies) that the media injects, not to mention their omissions, what if there was more to the Astroworld event than meets the eye?

The festival’s motto was “Open your eyes to a Whole New Universe.” What if that universe involved graphene oxide (in the vaccines) interacting with thousands of cell-phone-carrying jabbed participants being effectively held in a massive metal cage?

As Dr. Sherri Tennpenny (fast forward to Hour Five for her amazing talk) and others have outlined, the mechanisms of injury of these so-called injections are numerous, but here we explore how graphene oxide interacts with sound, hormones, and electricity.

Graphene oxide is not explicitly listed in these jabs but that’s because it’s a secret proprietary ingredient. You won’t find it labeled on the package insert either, so don’t bother looking for it. Just like KFC doesn’t have to share its special spice recipe, neither does Big Pharma, which already operates with reckless impunity.

You’ve got to wonder why they have worked so hard to conceal the presence of graphene oxide.

Despite denials and even having my own Twitter account suspended for suggesting graphene oxide is ‘the secret sauce,’ that will connect us to the Internet of Things, there is a study on how functionalized graphene oxide serves as a novel vaccine nano-adjuvant for “robust stimulation of cellular immunity.”

Arguably, graphene oxide was already included as an adjuvant in flu shots in 2019. For instance, here is proof that graphene oxide gives a boost to a new intranasal flu vaccine.

With its multitude of astonishing properties, graphene oxide, actually discovered in 1859, earned the title of a “wonder material.” Graphene oxide is comprised of carbon atoms aligned in a one-atom-thick layer, arranged in the pattern of a hexagonal lattice. While serving as a building block of graphite (used in pencils among other things), graphene is a remarkable substance.

Graphene oxide is an incredibly diverse material; it can be combined with elements ranging from gases to metals to produce new materials possessing superior properties. In fact, researchers worldwide continue to investigate its properties to create and patent new materials and applications including transistors and computer chips, batteries, supercapacitors and other energy applications like solar cells, touchscreens, and antennas. Medical applications include biosensors, cell imaging, drug delivery hydrogels, and DNA sequencing.

Graphene oxide has been used by companies like Apple, HP, Sony, and Microsoft. Are you a piece of hardware? Why are they putting graphene oxide in our bodies? Is it because the graphene circulates in the blood, and basically forms antennas? Is this part of the transhumanist agenda to connect us with the Internet Of Things (I.O.T.)?

Graphene oxide also has adverse effects on the human body. It blocks detoxification in the body by blocking glutathione. It can be activated by 5G frequencies, passes thru the blood-brain barrier, is magnetic and toxic.

Before we dive deeper, let’s go back –way back– to the beginning of this plandemic, now almost two years ago. 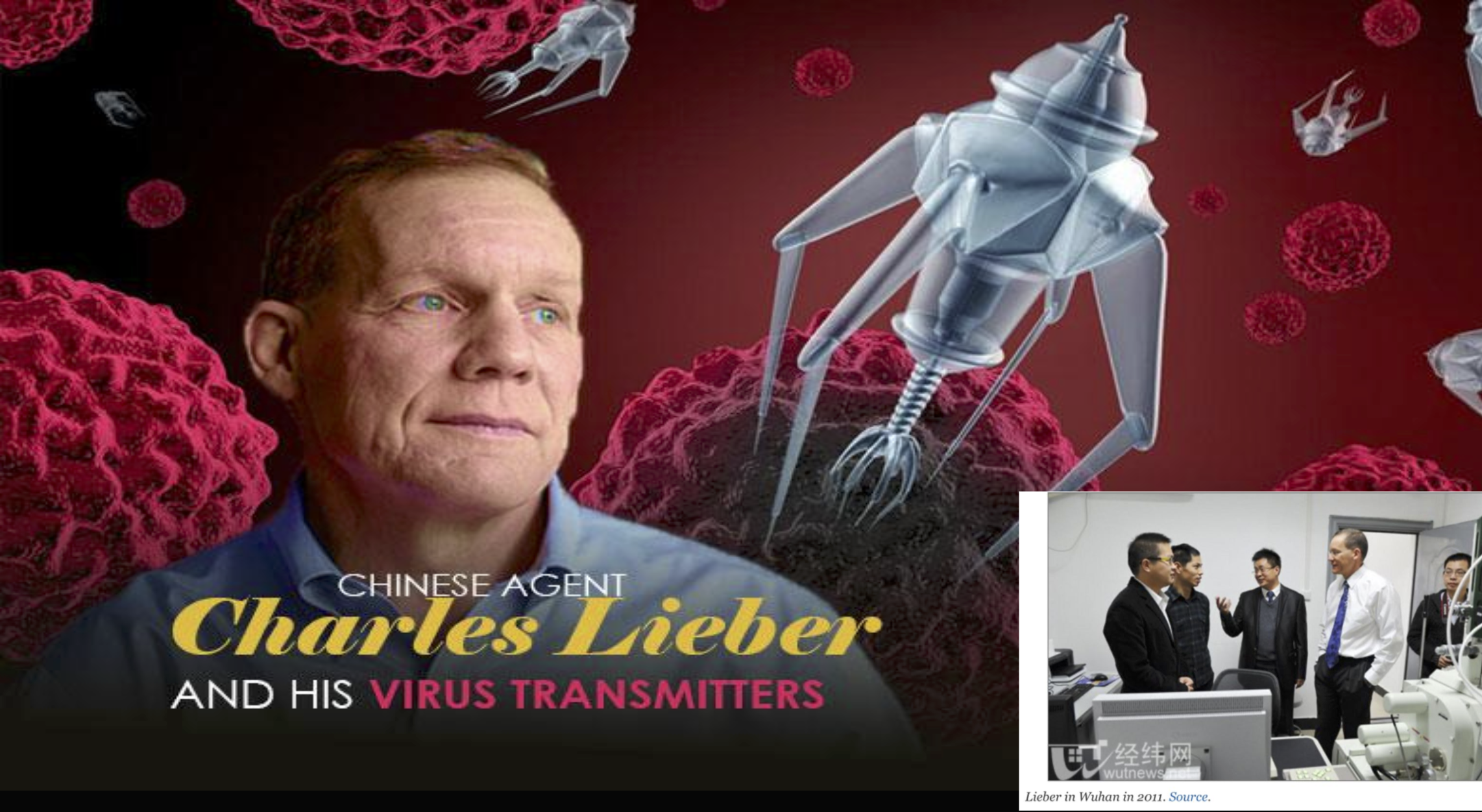 Source: Before Its News

Interestingly, the capitol of China’s Hubei Province was the first 5G demonstration zone in the Central Business District (CBD), according to a 5G cooperation agreement signed between China Mobile and local authorities on September 3, 2019.

So 5G services were first piloted in Wuhan. I lived across from an AT&T Tower and at the same time dealt with mold, which is when I learned from the genius Dr. Dietrich Klinghardt that electromagnetic field (EMF) excites bacteria, fungus, and parasites.

In late February 2020, I theorized that perhaps something injected in mandatory vaccines was “parlaying” with 5G.

Incidentally, in 2017, in a study out of Italy that looked at adjuvants, the researchers found that 15 traditional vaccines (and 44 variations of these), all manufactured by leading global companies, shared a previously unreported and troubling similarity: the vaccines were “heavily contaminated with a variety of nanoparticles.”

About this time, I also learned that Charles Lieber was arrested by the Department of Justice (DOJ) on January 28th, 2020. The DOJ announced that the Chair of Harvard University’s Chemistry and Chemical Biology Department, along with two Chinese nationals, had been charged in connection with aiding the People’s Republic of China.

Federal authorities arrested Lieber on charges that he made false statements to officials investigating his funding sources. According to the government, Lieber lied to the Defense Department (DoD) and the National Institutes of Health (NIH) about his alleged ties to China’s Thousand Talents Plan, a talent recruitment program.

In June 2020, a federal grand jury indicted Lieber on two counts of making false statements. Later that summer, he was additionally indicted on four related tax offenses for allegedly failing to report income he received from the Wuhan University of Technology.

Regarding his nanotech innovations in specific biosensors, Lieber stated: “This innovation is important because it indicates that when a man-made structure is as small as a virus or bacteria, it can behave the way biological structures do.”

Lieber had to relinquish his US passport. On March 10, 2020, the governor of Massachusetts declared a state of emergency. The very next day, Lieber asked to amend the conditions of his release. By March 12, the judge granted him the ability to travel from Pennsylvania and New Jersey for personal reasons. He was permitted to circumvent the lockdowns.

In the end, Lieber, the prized nanotech king, with his pages of nano-related patents, – and his many ties to China, Israel, Epstein, Harvard, and Billy Boy Gates – was kept out of the mainstream narrative. He later sued Harvard that owns part of his home, over legal fees.  Several scientists published a public letter defending him and his global participation with China.

Lieber will head to trial this December to fight six felony charges.

Share this article with your friends. Help us grow.  Visit DrTenpenny.com