“Once it appears there, it will be recognized by B-lymphocytes (B-cells), which will then start making antibodies to it. Furthermore, some parts of the spike protein can also be cleaved off by proteases on the cell surface and released from the cell. If this happens within the circulation, the released fragment—referred to as S1—can bind to blood platelets (thrombocytes) and activate them. In this manner, the spike protein directly promotes blood clotting.”  *The S1 is a subunit of the chimeric spike protein.

“As with any protein that is synthesized within the cell, a small number of molecules will undergo fragmentation, and the fragments will be presented on the cell surface in association with specific (HLA-) carrier proteins. [HLA – human leukocyte antigen is an immune system surface marker protein. (25)] The purpose of this mechanism is immune surveillance—as soon as fragments show up of some protein that the immune system does not recognize as “self,” an immune response will be mounted against that protein and against the cells that produce it. This response is mediated by cytotoxic T-lymphocytes (CTLs, T-killer cells).”

“In mounting its cytotoxic response, the immune system will not distinguish between a true virus infection and the expression of an mRNA vaccine—as long as the spike protein fragments appear on the cell, the killer cells will be on the march. If the vaccine is expressed in the cells that line the blood vessels—the endothelial cells—the vascular lesion caused by the immune attack will again set off blood clotting. Thus, we have at least two distinct paths toward blood clotting after vaccination.”

Another article in the Circulation Research journal (Lei, et al, 2021) includes further detail about the vascular and lung injury risks from the spike protein causing downregulation of the ACE2 receptor function. Without ACE2 function, edema, and excess fluid builds up in the lungs and can occur throughout the body.

The takeaway here is that the mechanism of injury is inherent in the design. Legendary Dr. Sherri Tenpenny has outlined a total of 40 mechanisms of injury.

For a deeper dive, into the mechanism of injury of the spike protein and the jab’s toxicity, read the excellent paper excerpted.

The spike protein helps the virus gain entry into human cells to replicate at the ACE2 receptor, can block other types of receptors,  and can interfere with ankyrin repeat domains of TRP channels. TRP channels are needed for hearing, sight, and balance, and magnesium absorption within the GI tract or reuptake within the kidneys. (29 target=”_blank” rel=”noopener noreferrer”) Low magnesium is a risk factor for cardiovascular problems and hypertension or edema.  The spike protein can also cause cells to clump together and join into a multi-nucleated mass of cells – leading to a risk for blood clots. The syncytial clusters may also be a factor in the loss of white blood cells and a lower lymphocyte count.

The vaccine spike protein and its interactions with the human immune system can also produce health issues.

In particular, clinical trials did not monitor any laboratory parameters that could have provided information on these risks, such as those related to blood coagulation (e.g. D-dimer level (31)/thrombocytes), muscle cell damage (e.g. troponin/creatine kinase), or liver damage (e.g. ?-glutamyltransferase). That the various regulatory agencies granted emergency use authorization based on such incomplete and insufficient data amounts is criminal. In truth, we are the lab rats and the real trials are occurring only now—on a massive scale, and with devastating results.

In a letter to the US FDA and CDC, Dr. Lee wrote: “In 20 years of practicing medicine [ICU], ‘I’ve never witnessed so many vaccine-related injuries.” (32)

Meanwhile, “Americans who received a vaccine are more likely to develop rare blood clots, in the brain, than the average person before the pandemic.”

Viral infections, in general, as Thomas E. Levy, MD, JD states in Resolving “Long-Haul COVID” and Vaccine Toxicity, Orthomolecular.org, (11), have been found to cause coagulopathies resulting in abnormal blood-clotting.  Critically ill COVID-19 ICU patients demonstrated elevated D-dimer levels roughly 60% of the time. An elevated D-dimer test result is almost an absolute confirmation of abnormal blood clotting taking place somewhere in the body. Such clots can be microscopic, at the capillary level, or much larger, even involving the thrombosis of large blood vessels. Higher D-dimer levels that persist in COVID-19 patients appear to directly correlate with significantly increased morbidity and mortality.

Platelets, the elements of the blood that can get sticky and both initiate and help grow the size of blood clots, will generally demonstrate declining levels in the blood at the same time D-dimer levels are increasing since their stores are being actively depleted. Bleeding risks can then become a problem elsewhere in the body, as the lower platelet count prevents normal repair needed to stop minor tissue damage from worsening. A post-vaccination syndrome known as vaccine-induced prothrombotic immune thrombocytopenia (VIPIT) (40) with these very findings has been described by several researchers. (41)

Persistent evidence of blood clotting (increased D-dimer levels) in chronic COVID-19 patients might be a reliable way to determine the persistent presence/production of the COVID-19 spike protein. (42)

“Clotting pathologies in both acute COVID-19 infection and in Long COVID/PASC might benefit from following a regime of continued anticlotting therapy to support the fibrinolytic system function.” (42)

Another way, discussed below, might be dark field microscopy to look for Rouleaux formation of the red blood cells (RBCs).

Under conditions of inflammation and systemically increased oxidative stress and fibrinogen levels, RBCs can aggregate to varying degrees, sometimes sticking together like stacks of coins with branching of the stacks seen when the clustering is maximal. This can occur quickly whenever a certain concentration of excess particles (“depletants”) are present, (45), whether fibrinogen or possibly spike protein. This is known as rouleaux formation of the RBCs and can lead to blood clots and stroke or heart attack risk. (44) Image of rouleaux stacking of red blood cells, page 7: (44a)

Fibrinolytics would help reduce the risk by removing excess fibrinogen, and trace mineral supplements may help. Low trace mineral levels have also been associated with increased risk for the rouleau effect. In a video with subtitles in French and a scientist speaking in English, at1:12 “low mineral content in the blood” is mentioned as a factor in the rouleau effect seen in the blood after a CoV injection. At ~ 3:50- 4:30, low oxygen levels are mentioned as a result of the dysfunctional stacked and clotted red blood cells. He is concerned that it would endanger a developing fetus and cause brain damage in the infant or lead to the death of the fetus and a miscarriage for the CoV injected pregnant woman. (46)

The correlation between an increased D-dimer level and Rouleaux formation of the RBCs remains to be determined. Certainly, the presence of both should trigger the greatest of concerns for the development of significant chronic COVID-19 and post-COVID vaccination complications.

In platelets taken from COVID-19 patients, platelet stickiness predisposing to thrombosis has been shown to result from spike protein binding to ACE2 receptors on the platelets. Of note, a D-dimer test that is elevated due to increased blood clotting will usually only stay elevated for a few days after the underlying pathology provoking the blood clotting has been resolved.

Chronic or “long-haul” COVID-19 infections often demonstrate persistent evidence of blood clotting pathology. In one study, 25% of convalescent COVID-19 patients who were four months past their acute infections demonstrated increased D-dimer levels. Interestingly, these D-dimer elevations were often present when the other common laboratory parameters of abnormal blood clotting had returned to normal. These other tests included prothrombin time, partial thromboplastin time, fibrinogen level, and platelet count. Inflammation parameters, including C-reactive protein and interleukin-6, typically also had returned to normal.

In November 2021, the WSJ even reported that researchers investigating heart-related risks linked to the shots are now exploring several emerging theories, including one centered on the spike protein made in response to vaccination.

Another way to look at health and disease is through the lens of metabolomics, the study of metabolites, very small molecules produced by chemical reactions in our cells. The tiny microscopic “machines” transacting these chemical reactions are enzymes. When a metabolic pathway does not function, the flow of chemical reactions is hindered and homeostasis is compromised. The metabolic disorder is analogous to the degree of enzyme dysfunction, which in turn is often due to the lack of the corresponding co-factors (vitamin, mineral, amino acid).

So you can experience dis-ease if you are not getting the needed nutrients or micronutrients and are not able to absorb them, coupled with multiple chemical exposures that create a chemical body burden. 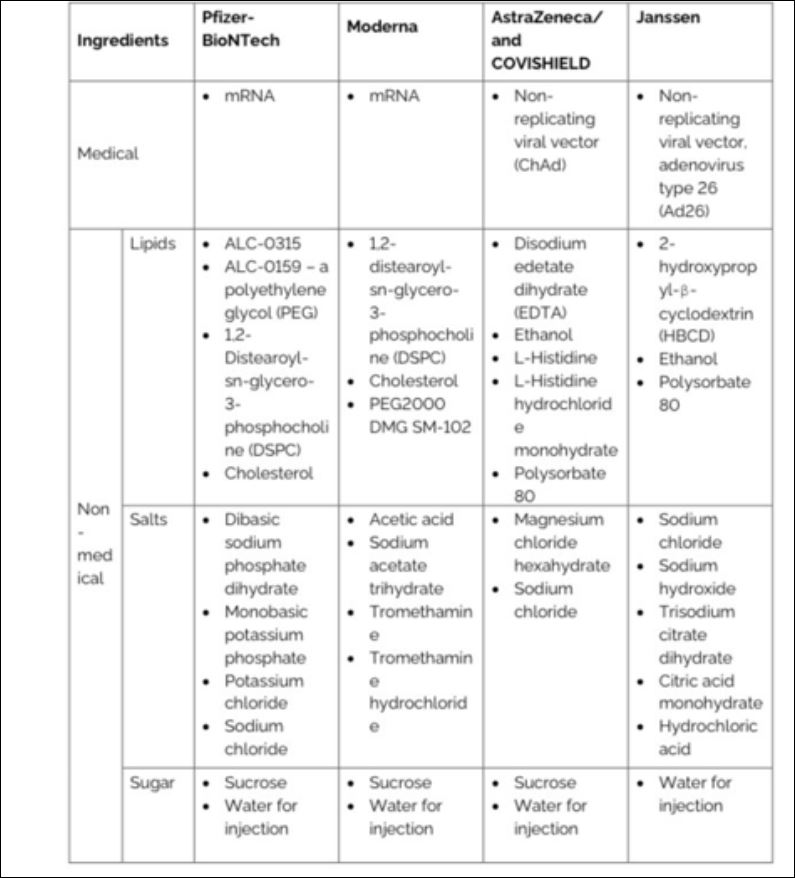 According to Dr. Thomas E. Levy, MD, JD, all toxins ultimately inflict their damage by directly oxidizing biomolecules, or by indirectly resulting in the oxidation of those biomolecules (proteins, sugars, fats, enzymes, etc.).

When antioxidants can donate electrons back to oxidized biomolecules (reduction), the normal function of these biomolecules is restored. Unfortunately, an onslaught of toxins can make healing a challenge.

Meanwhile, as Mike Adams reports “Injecting any substance into the human body makes its order of magnitude more potentially toxic because it bypasses the protections of the digestive tract or the respiratory system. Injecting mercury into a human being — at any dose — should be globally condemned as a criminal act. That it is currently considered an acceptable act in the field of medicine, only condemns the true destructive nature of modern medicine. Under the vaccine doctrine, “First do no harm” has become “Poison for profit.“

While we will not go into all the toxic ingredients, partially because they haven’t all been disclosed, let’s look at some main ones.