Aluminum is one of the most polarizing and divisive points of contention when it comes to the vaccine debate. Aluminum has commonly been considered a dangerous toxin unless found in a vaccine. Some vaccine makers have claimed to remove aluminum, proponents of safe vaccines often deny these claims.  Studies by Dr. Christopher Exley claim to have found intoxication of the “ubiquitous and omnipresent metal” causes all types of health issues. He claims that aluminum is able to cross the blood-brain barrier.

Exley further claims that no “normal levels” of aluminum exists. Dr. Exley now has a newly published study which highlights the contents of aluminum in the brain tissue. Published in the Journal of Trace Elements in Medicine and Biology, the documentation shows extremely high recordings of aluminum inside human brains. Five to ten autistic brain donors were used in the study. 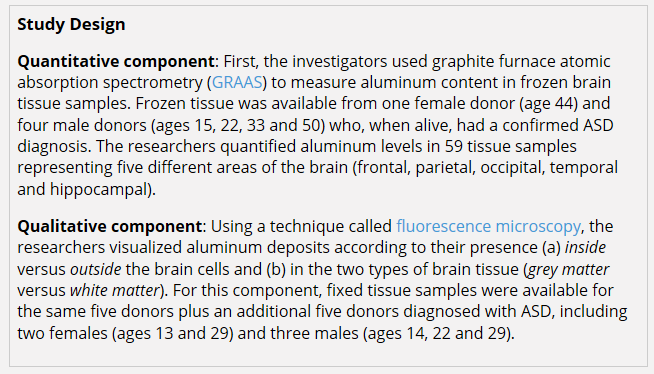 The study shows record amounts of aluminum ever found in healthy human or even unhealthy brain tissue.

A summary via Vaccine Impact