Yesterday, Thai divers carried out one of the most incredible rescue missions in modern times when they saved a group of young boys from a flooded cave complex. The 12 boys had been deprived of food and were subjected to colder temperatures. Following their rescue, the water pumps failed, making their rescue an even more timely event. Of the divers, one man sadly ost his life on the mission.

The boys were immediately given Tetanus Toxoid vaccines and rabies vaccine, as well as antibiotics. This led many to speculate as to why vaccines were seemingly the most immediate medical intervention following the rescues. The boys were not reported to have been exposed to rabid animals.

Two of the boys reportedly have pneumonia.

“Two of the first four boys evacuated have experienced irregularities in their lungs, and one of them has suffered an injury on the right ankle. All of them have received medical treatments,” Public Health permanent secretary Dr. Jetsada Chokedamrongsuk said.

The team went missing on June 13th and a media frenzy covered the story for weeks as rescuers and government officials from around the world plotted to rescue the soccer team from adverse, seemingly impossible conditions. A monsoon flooded the cave they were exploring, forcing them to retreat deeper into the cave network as flood waters surged in.

The complex rescue mission is depicted on the below infographic. 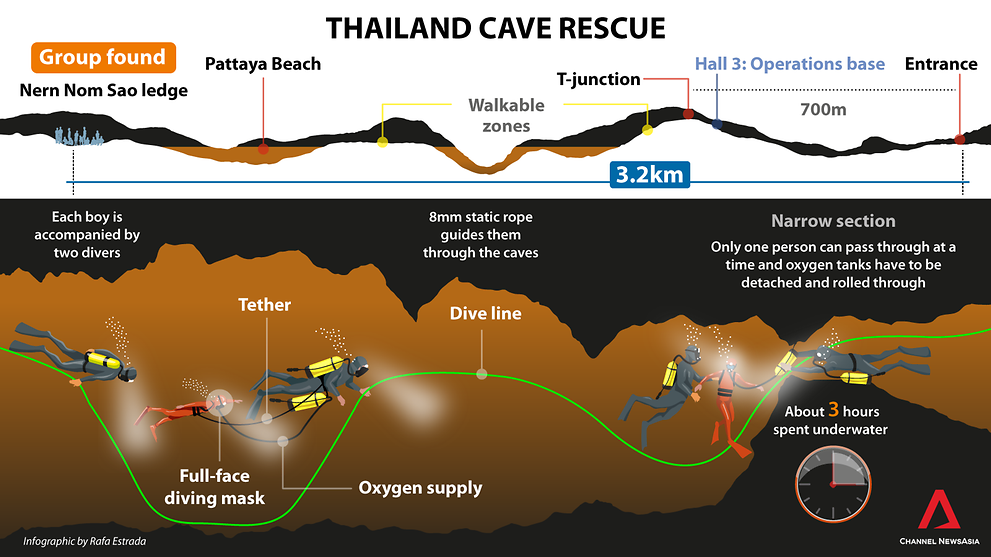 The rescued boys are now happily reunited with their families.

The boys were given liquid foods until it was determined that they were healhty enough to ingest solid foods.

“They can only take food that is easy to digest. All of them are now healthy, experience no fever and report good mental health,”

“The first four who were rescued can sit up in their beds by themselves. Today we’ll get them to stand up and walk around.” Dr. Jetsada said.

Be the first to comment on "Thai Cave Rescue: Vaccines, Antibiotics, First Meds Kids Given"