Have you ever seen the movie Soylent Green? This year, 2023, marks the movie’s 50th anniversary. While the film was made in 1973, its futuristic plot was set in 2022. Earth was overpopulated and polluted; there were no natural resources left and everyone’s nutrition came from plankton in the oceans, in a product made by Soylent Industries, hence the movie title. There’s a murder, an investigation and a cover up, but eventually the detective discovers a disturbing secret. Soylent’s food is not at all made of plankton, but rather of human meat.

Fast forward to 2022, and we have the equivalent of Soylent Industries. It’s shocking, but unfortunately true. It’s called ‘The Human Meat Project.’ Here is the description from their own website:

“Welcome to the Human Meat Project, we are the human meat donation program. By donating bodies for human consumption, we are taking action to solve overpopulation, which leads to climate change and the greenhouse effect caused by the mass farming of livestock animals in order to feed the world. At Human Meat Project, we value every body and every life.”

They’re. Eating. Humans. Yes, you read this passage right. Basically, these sickos are saying that we are using too many farm animals for food, so to solve that, eat deceased humans instead. The site goes on to say that they source humans from around the world, you know, for diversity, equity and inclusion. They welcome every nation to give back — literally.

The usual barrage of fact checkers quickly stormed the Internet when the buzz about the Human Meat Project first started on TikTok. For example, Yahoo News says the project is an art project, and not real, according to their website terms and conditions. I read them, and they are quick to point out that this is conceptual art that will not be acted out in real life. However, the site is all about collecting “donor” data and they do advertise a donor list on their site. Then, it seems they post the anonymized donor data this way, race, country of origin, lifestyle and diet, a ‘use by’ date and (gasp) cooking instructions just in case you’re not a raw foodie! 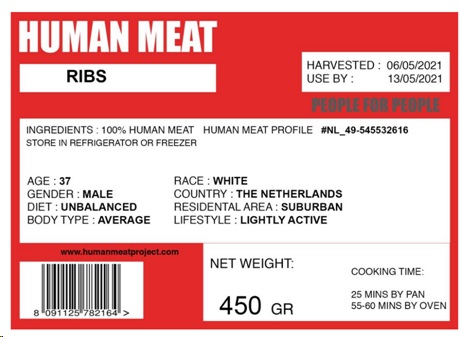 I love art as much as the next gal, but this isn’t art, it’s evil. And look at the other “artistic” things that are going on these days, like Marina Abramovic’s evil works involving blood, human bones, cannibalism, spirit cooking and more. It gives me the heebie jeebies for sure. Oh, and I should also mention Balenciaga’s “artistic” advertisements, which I wrote about here.

Some say this “art” is done to elicit a shock factor. Could be, or is it more than that? After all, the makers of Soylent Green made their point 50 years ago. More recently, Swedish scientist Magnus Söderlund lectured on the necessity of cannibalism to save the planet. Blaming the farm industry for unnecessary warming of the Earth, his fix was that dead bodies become the food of the future.

If you disagree with Söderlund and the thought of giving up your body to the buffet line is not in your cards, never fear, because human composting is here. Yes, climate “experts” say that death has a large carbon footprint, and they want to compost your body, just like kitchen scraps such as banana peels and eggshells. Human composting has kinder, gentler names such as natural organic reduction and involves the dead body being placed in a vessel along with biodegradable materials that transform the person into nutrient-dense soil.

Human composting is actually legal in six states, with Washington State as the first to legalize the practice, and New York State becoming the latest at the end of 2022. Oregon, California, Vermont and Colorado round out the group.

Naturally, advocates of the practice want it to slow the climate crisis. Death itself leaves a carbon footprint, and the body takes too long inside a coffin to decay, they claim. And you certainly don’t want to choose cremation because it requires so much fossil fuel; they say that one body emits 418 pounds of carbon dioxide during the cremation process. That is like driving nearly 500 miles in a car. Egads!

The company ‘Recompose’ became our nation’s first human composting facility in December 2020. The founder got the idea from livestock mortality composting, where farm animals are recycled back to the land. They use an 8 by 4 foot steel cylinder, and put the body on a bed of straw, alfalfa and wood chips. Beneficial microbes thrive and voila! – in 120 days you have a cubic yard of soil. Recompose has processed over 200 bodies in two years. It’s cheaper, it’s greener, what’s not to like? Most people are candidates except for people who died from tuberculosis, Ebola or prion disease.

In conclusion, isn’t this taking climate change just a tad too far? First, there is not any vigorous science debate as to the actual degree of climate “crisis” we are even experiencing. Much like the vaccine debate, the far left has hijacked the climate debate. There is a climate crisis and we must eat people to remedy that. Period. No scientific debate. End of discussion. More importantly, we are human beings and more than a few may strongly believe that these practices are a serious desecration of the human body. Lots of abominations are being done in the name of climate change, but these plans may have a more sinister origin and purpose. Whatever the motivation, eating people to reduce global warming is NOT the solution.

Fed Up Texas Chick is a contributing writer for The Tenpenny Report. She’s a rocket scientist turned writer, having worked in the space program for many years. She is a seasoned medical writer and researcher who is fighting for medical freedom for all of us through her work.