Correction: The geographic location first described in this article was incorrect. These events are not occurring in American Samoa, but in Samoa, an independent territory and member of the United Nations. The correction has been made. The timeline and the actual events are the same. I apologize for the inaccuracy and for any confusion.

The speed at which the pro-vaccine forces are working to stomp out freedom of speech, freedom to learn, and freedom of choice is simply staggering. Hijacking the mainstream media and censoring all social media platforms to take complete control of the message shows how far they are willing to go to censure information not in lockstep with the Healthy People 2020 agenda. The plan is to vaccinate everyone, with few exceptions, and to eliminate even the difficult to obtain medical exemptions.

Samoa, known as Western Samoa until July 4, 1997, is a country consisting of two main islands and four smaller islands. Samoa is a sovereign state and a member of the Commonwealth of Nations and is a member of the UN. As of fall 2019, the population of Samoa is approximately 197,500 people.

For those who have – or have not – been following the travesty happening in Samoa, here is a timeline that captures the measles hysteria occurring in these far off islands:

So, let’s sum up and review this timeline. There are certainly unanswered questions:

According to ReliefWeb, UNICEF delivered a total of 115,500 doses of measles vaccines to Samoa since October 1, including the required diluent, syringes and safety boxes, as well as sufficient supplies of Vitamin A. Vaccinations started, with the first death from measles occurs on October 15. Within a month, hundreds of cases of measles were reported and the government declared an emergency on November 15, leading to mass vaccination of everyone, irrespective of age, vaccination status or previous recovery. And then, the government requested USD$10.7M from the UN to prevent “future outbreaks.”

The book, Rules for Radicals: A Pragmatic Primer for Realistic Radicals written by Saul Alinsky, was published in 1971. The 10 rules he puts forth for ‘community activism’ have been used by many modern politicians to guide their socialist aspirations. Alinsky’s Rule #9 is “The threat is usually more terrifying than the thing itself.”

Capitalizing on this rule in 2011, Obama’s chief of staff, Rahm Emanuel, expanded on this premise by saying, “First of all, what I said was, never allow a good crisis to go to waste when it’s an opportunity to do things that you had never considered, or that you didn’t think were possible.”

Could armies of vaccinators have been mobilized to innoculate an entire country over two days if were it not for instituting an overwhelming fear of measles?

Certainly, measles is being portrayed as an infection more deadly than rabies. Much has been written about how measles went from a common, rite-of-passage infection to an uncommon rash and fever after the introduction of the MMR vaccine in 1963.

But when the MMR vaccine became accepted as a routine part of childhood, along with the administration of many more vaccines – the current schedule includes 69 doses of 16 vaccines – rather than accepting an occasional outbreak of infection, eradication of these pathogens became the goal. Radical responses to a few cases of a so-called vaccine-preventable illness have become the norm.

Alinsky’s Rule #9 is used effectively with each reported case. And the general community falls for the hysteria every time.

As for not letting a good crisis go to waste? The WHO declared “anti-vaxxers” to be one of the top 10 global health threats in 2019. Now, every opportunity to create chaos and blame the unvaccinated for an outbreak, regardless of size, is capitalized on by the CDC, WHO, UNICEF, and of course, GAVI.

Vitamin A instead of Vaccination

Outbreaks of vaccine-preventable infections draw a lot of attention. The media whips the population into a frenzy. Dramatic mass vaccination campaigns are initiated. Global organizations launch offensives. Proclamations are made. Deaths are magnified and those who recover uneventfully are ignored.

The problem is, it takes at least 10 days from the time a vaccine is administered for an antibody response to develop. The antibody is the end-game of vaccination, performed to ostensibly to protect from illness and prevent viral spreading. That’s about the same length of time it takes for measles, and most other viral infections, to run its course. By the time everyone is vaccinated, the natural outbreak is mostly over. But, of course, mass vaccination is given the credit for bringing the crisis under control.

Scientific evidence abounds that children who are given vitamin A before or during an episode of measles have a less severe course and recover more quickly. The potential benefit of vitamin A therapy for measles was first reported in 1932.  Even 26 years ago, in 1993, the American Academy of Pediatrics, the WHO and UNICEF advocated for giving vitamin A to children who were experiencing measles. This full-text article describes the following:

Several recent investigations have indicated that vitamin A given to children with measles in developing countries has been associated with reductions in morbidity and mortality. The World Health Organization (WHO) and the United Nations International Children’s Emergency Fund (UNICEF) issued a joint statement recommending that vitamin A be administered to all children diagnosed with measles in communities where vitamin A deficiency (serum vitamin A less than 10 µg/dL) is a recognized problem and where mortality related to measles is greater than 1%.

The WHO explained to doctors – in detail – how to clinically identify a vitamin A deficiency without blood testing:

One of the most common signs of vitamin A deficiency are ophthalmologic (eye) signs which include: night blindness, Bitot’s spots, grayish-white deposits on the conjunctiva next to the cornea, and xerophthalmia (extremely dry eyes).

Leaving nothing to chance, the WHO gives specific dosage regimens for vitamin A deficiency during measles:

The recommended regimen is 100,000 IU by mouth at the time of diagnosis for infants younger than 12 months of age, and 200,000 IU for older children. The dose should be repeated in 24 hours and again 4 weeks later. There is little concern about vitamin A toxicity until the cumulative dose is greater than 1,000,000 IU, which is only seen when high doses are taken over several weeks.

The WHO is so aware of the significant health issues associated with vitamin A deficiency and its consequences, that it recommends giving two rounds of high-dose vitamin A supplementation per year prophylactically to significantly reduce mortality and morbidity in areas where measles is endemic. The periodic supply of vitamin A has proven to reduce mortality by up to 23% overall, and by up to 50% in acute cases.

For the last twenty years, UNICEF has also advocated an annual vitamin A supplementation program in 80 countries for children up to 5 years of age, and even states in its vitamin A publication, “It is inexcusable that vitamin A deficiency is still contributing to the loss of children’s lives.”

Each dose consists of two drops of concentrated, high-dose retinol costing less than USD$0.04. In very poor countries, even that cost is underwritten by the WHO or UNICEF.  These annual campaigns are advocated to reduce the incidence of childhood diarrheal disease and measles. Most importantly, vitamin A supplementation can improve a child’s chance of survival by 12 to 24 percent.

Given this information on vitamin A, was the UN lax in its global health agenda? Were Samoan children provided the twice-annual vitamin A supplement recommended by the WHO and UNICEF? Are the unvaccinated really the cause of the deaths within this outbreak, or was it the lack of vitamin A that lead to a crisis that has been capitalized on by the mainstream for the benefit of the pro-vaccine agenda? Could this travesty have been avoided by giving a pennies-a-day supplement over the last several years? Could the USD$10.7million flowing into Samoa be a form of blood money?

I hope the answers to these questions – and many more – will be forthcoming over the next several months. I also hope that reports of vaccine-injured children – and adults – will not be the next epidemic arising from Samoa. 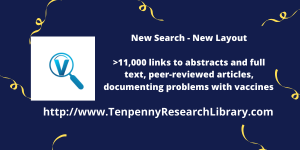 Dr. Sherri Tenpenny is a board-certified osteopathic medical doctor from Cleveland, Ohio. Dr. Tenpenny is a practicing physician and cares for patients 2.5 days per week. Dr. Tenpenny is an internationally known expert on the problems associated with vaccines. Students from all over the world have become confident parents and articulate activists through her online educational courses, found at Courses4Mastery.com. As the “Voice for the Health Freedom,” Dr. Tenpenny is an outspoken advocate for free choice in healthcare, including the right to refuse vaccination.

Be the first to comment on "The Real Crisis in Samoa"