In total, 15 of 23 macaque monkeys have died at the University of California at Davis in a Neuralink-funded project titled Development of a Large-Scale Brain-Machine Interface in Rhesus Macaques. “By now, the others may be dead too,” says Ryan Merkley, the director of research advocacy for the Physicians Committee For Responsible Medicine (PCRM).

Musk’s company, with the slogan ‘breakthrough technology for the brain’, has also implanted bluetooth-enabled chips into pigs and sheep to connect their brains with computers via a small receiver.

This technology is brought to us courtesy of NanoTech King and former Harvard professor Charles Lieber who awaits sentencing – not for colluding with the CCP or his more than 66 questionably ethical patents – but for tax evasion.

Neuralink, which began experiments in 2017, has admitted to animal deaths but denies any cruelty. In one 2020 video titled “Animal Care,” employees affirm that pigs are treated properly. However, a closer look at the video reveals a featured hog that looks mangled, with a horrific vertical scar down his forehead. It’s macabre and sickening.

If you treat an animal decently before and after you implant machinery into its brain, does that somehow make the treatments humane?

Veterinary records obtained by the Physicians Committee for Responsible Medicine (PCRM), a US non-profit that advocates alternatives to animal testing, describe monkeys picking at their cranial implants post-surgery only to be given drugs such as Simbadol, a high-concentration narcotic buprenorphine formulation, to prevent that action.

While the animals are under anesthesia, they are hooked up to “electrophysiology hardware” to make sure the electronics are working. Some monkeys in this experiment underwent “multiple major survival surgical procedures,” including as many as 10 craniotomies performed on one animal. 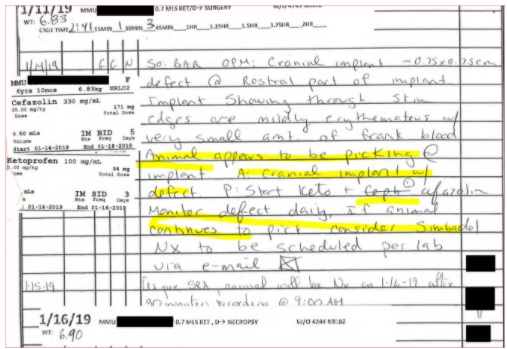 The Nefariousness of Neuralink

Neuralink has a $1.4 million contractual agreement with the University of California Davis. In response to a FOIA public record request by PCRM, UC Davis withheld almost all documents, claiming it was in the “public interest” to do so.

Actually, the truth will literally make you physically ill.

After PCRM filed an initial public records lawsuit in May 2021, they obtained more than 600 pages of disturbing documents, including animal use protocols and amendments, health records, surgical logs, necropsy reports, and other documents related to the use of monkeys in invasive brain experiments. 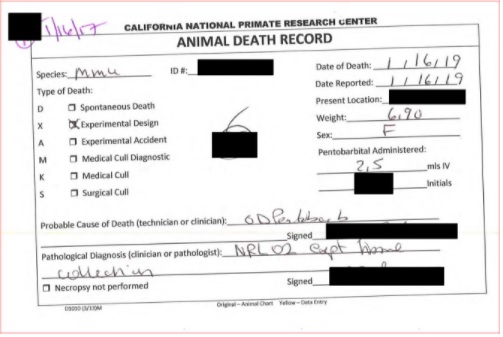 In the lawsuit, the committee also alleges that the school declined to release photos and videos of the experiments, saying the records belong to Neuralink, a private company not subject to California’s Public Records Act.

According to PCRM, videos were recorded on Neuralink-provided computers that the company later removed from the university.

“A private company was allowed to remove videos of these experiments from a public institution,” says Deborah Dubow Press, Esq., associate general counsel with PCRM.

Merkley, from PCRM, went on to say, “We believe UC Davis is in possession of photos, but it claims videos were removed by Neuralink and never technically in the possession of the university. We’re arguing that those videos were created using public resources with the help of public employees, so they should be subject to our records request.”

Brazen, audacious, and yet permitted.

In February 2022, PCRM filed a second public records lawsuit to compel the university to release videos and photographs of the monkeys used in the Neuralink-funded experiments. They also sent a letter referencing the violations to the US Department of Agriculture (USDA) and requested an investigation into what are “apparent egregious violations of the Animal Welfare Act.” The USDA’s Animal and Plant Health Inspection Service has confirmed that it will look into the invasive, fatal monkey experiments.

For what it’s worth, I also witnessed what I consider to be animal cruelty at U.C. Davis in 2009 while documenting artificial insemination of queen bees for my film Vanishing of the Bees, narrated by Elliot Page. After filming with the entomology lab, the scientist admitted she had inseminated a queen with watered-down coffee instead of semen, just for the camera. I was aghast. I had been an unwitting accomplice to the unnecessary prying open of a queen bee’s vagina to mechanically inject her.

In the Neuralink experiments, the egregious violations included removing portions of a monkeys’ skull and inserting electrodes into its brain. Additionally, to fill in ‘dead space from cracking the skull,’ they used an FDA-approved “BioGlue”  in an unapproved manner, killing at least two monkeys by destroying portions of their brain. 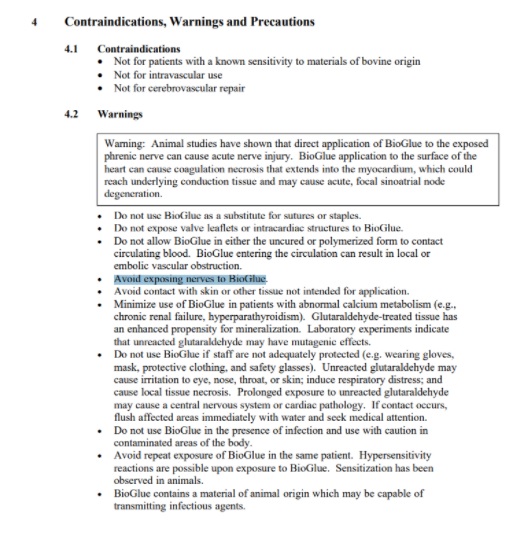 When I researched the details about BioGlue, I learned it contains glutaraldehyde and bovine serum albumin that, when combined together, supposedly make an excellent adhesive by creating strong protein cross-linking bonds.

Does anyone care that it also causes tissue toxicity and should not be allowed to come in contact with nerves? It appears that once you get the rubber stamp of approval,  the particulars are not scrutinized.

In addition to inserting a toxic adhesive into the animal’s brain, the monkeys were caged alone with steel posts screwed to their skulls, leading to facial trauma and seizures.  They experienced recurring infections at implant sites and were dosed with large quantities of antibiotic prescriptions.

In some cases, Neuralink and U.C. Davis euthanized the monkeys before they were even used in the experiment. That means, due to infection and failing health, they were killed before the experiments even got started.

I wonder if the U.C. Davis and Neuralink employees casually discussed their invasive and deadly brain-hacking experiments over alcoholic beverages at the Monkey MindPong Bar, Neuralink’s hang-out spot.

The bar was named in light of Neuralink’s claim that Pager, a male macaque monkey, can play Pong – a computer game – using his mind.  Pager could move a cursor on-screen without using a joystick. Neuralink said this was achieved after one of their chips fed the information from the monkey’s neurons into a decoder. Apparently, this is nothing new. Neuroscientists have been using neurofeedback for years. I have personally made a movie play using my brain. One does not need to perform brain surgery to make this happen.

Neuralink’s gross experiments continue in at least two private Neuralink facilities: one in Fremont, California, and one outside of Austin, Texas.

When I learned this, I had a flashback to the movie, Ex-Machina, a sci-fi thriller featuring “ground-breaking” experiments in synthetic intelligence with a highly advanced humanoid artificial intelligence.

Merkley shared that capturing and using primates for ‘science’ is now a boutique industry. The island of Mauritius, for instance, is a source for macaque monkeys. According to the USDA, 68,257 primates were used in experiments in 2019 (the latest available stats.)

Neuralink writes that “all novel medical devices and treatments must be tested in animals before they can be ethically trialed in humans.” Yet despite the fact that many monkeys have experienced horrific deaths, Neuralink is moving full-steam ahead in their plan to test their brain implants on humans.

Case in point: Neuralink is hunting for a Clinical Trial Director to work closely with doctors and engineers to welcome the “first clinical trial participants!” (Note: the exclamation mark is theirs).

They were also looking for an Algorithms/DSP Engineer to ‘accelerate’ pathways ‘to human-ready brain implants.’ Literal Human Noggin Hackers. 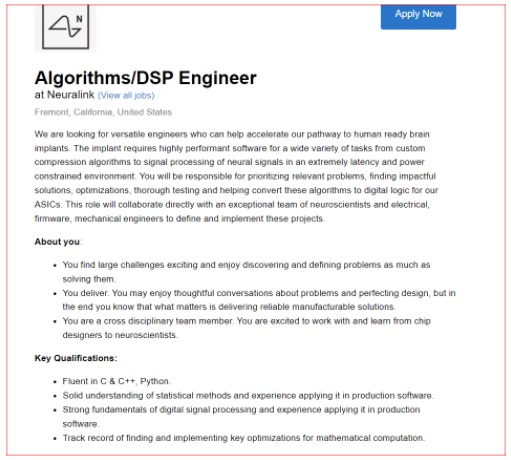 I assume there are people out there who would literally die to be one of the first test-human in Elon Musk’s pioneering efforts.

Neuralink will have to jump through a series of regulatory hoops before implanting a device in a human brain.

Yet, with that said, I have personally been approached by people who claim they have Lieber nanotech in their brains.

“I am getting abused…I mean really, really bad. I have a lot of tech in me; I have wifi chips in my ear and skull through which they are assaulting me horrifically with 5G, nano, and more.”

When I probed (no pun intended) further, he responded:

“You want definitive proof? Cut this crap out of me. Find someone to cut this wifi chip out of me.”

“We are probably one of the last generations of Homo Sapiens because in the coming generations we will learn how to engineer bodies and brains and minds. Humans are now hackable animals, this whole idea that humans have a soul or spirit or free will like when I chose what I want in the supermarket or in the elections because that’s my free will, that’s over.

Under the Rona Regime, we openly became lab rats. In June 2020, in the face of the (fake) COVID-19 Hegalian-esque emergency, a symposium was held to weigh the pros and cons of bypassing animal trials.

Where are the organizations that stand against using humans for research purposes?

As Merkley states, Musk promoted this technology as a way to help people with paralysis and Parkinson’s, yet

Musk also talks about a needed “symbiosis” between human brains and A.I.

Musk, Harari, and other technocrats have warned that A.I. could trigger the next World War, where super-intelligent robots could dominate the world. In fact, Lieber designed the neural lace “to upgrade the human brain to be more competitive against A.I.”

Neuralink started with rodents and quickly graduated to primates. I would venture to guess that Neuralink has experimented with many more than 35 monkeys.

Mankind is next. Arguably, we are already the monkeys. The question remains, who will fight for us?

Listen to Maryam Henein interview Ryan Merkley of PCRM about Neuralink and its various atrocities against animals: