“Digital electronics are so powerful that they dominate our daily lives. When scaled down, the difference between digital & living systems blurs, so that you have an opportunity to do things that sound science fiction–things that people have only dreamed about.”  Charles M. Lieber

As Ghislaine Maxwell’s show trial winded down, there was scant coverage of the Charles Lieber trial despite the fact he is the defining influence in the field of nanoscience and nanotechnology. Thomson Reuters even ranked Lieber as #1 in the world’s top 100 chemists for the decade 2000-2010. I call him the NanoTech King. The trial, which, unfolded a year and a half after his arrest, began with jury selection Tuesday, December 14, and concluded after only six days.

After less than three hours of deliberations, a federal jury in Boston’s US District Court reached a verdict and found that the former Chair of Harvard University’s Chemistry and Chemical Biology Department was guilty on all six counts – two counts of making false statements to federal authorities, two counts of making and subscribing a false income tax return, and two counts of failing to file reports of foreign bank and financial accounts (FBAR) with the Internal Revenue Service (IRS).

Who is Charles Lieber?

Lieber served as the Principal Investigator of the Lieber Research Group at Harvard University, which received more than $15 million in federal research grants between 2008 and 2019. Unbeknownst to his employer, Harvard University, Lieber became a “Strategic Scientist” at Wuhan University of Technology (WUT), and, later, a contractual participant in China’s Thousand Talents Plan (TTP) from at least 2012 through 2015.

While I have not found anyone else who has cited this, one court document submitted by the government claims that Lieber was actually the “director of WUT-Harvard Joint Nano Key Laboratory, which was established in 2009.” So did Harvard know about Lieber’s research with WUT or not? 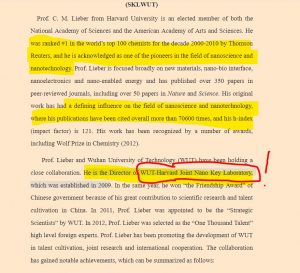 Under the contract terms, WUT paid Lieber a salary of up to $50,000 per month, living expenses of up to $150,000 annually, and awarded him more than $1.5 million to establish a research lab in Wuhan. In 2018 and 2019, Lieber lied to federal authorities about his involvement in the Thousand Talents Plan and his affiliation with WUT. He suggested to the FBI and to Harvard that his only connection to communist China and the TTP was related to a Chinese former student and that he did not have access to any Chinese bank accounts. 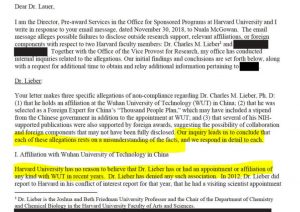 The DOJ has previously described the TTP as “a tool of the Chinese Communist Party to attract, recruit, and cultivate high-level scientific talent in furtherance of China’s scientific development, economic prosperity, and national security.” Through the TTP, the Chinese government would often reward individuals for stealing proprietary information.

TTP was seen as a key part of Beijing’s “Made in China” 2025 blueprint for scientific dominance. But it appears that Lieber was no stranger to China relations. In 2009, the same year he created the joint program, he also won China’s “Friendship Award” because of his “great contribution to scientific research & talent cultivation in China.” He was also the “co-Principal Investigator of the International Science & Technology Cooperation Program of China.” Many of his patents are co-written with Chinese scientists.

In a 2013 email from a WUT employee, he was thanked for his “irreplaceable contribution to China.”

Yet Lieber lied repeatedly, allowing him to maintain access to federal research funds.

During the initial FBI interrogation on January 28, 2020, as the agents revealed how much they actually knew and showed Lieber copies of documents and emails, he “shifted gears.”

“Yes, that’s pretty damning. Now that you bring it up, yes, I do remember,” he said. “Now that you remind me, I used to have some kind of bank card.”

In another moment he told the FBI, “It could be more than $50,000. Honestly, I think it must be less than $100k – OK, obviously I blacked out most of this stuff.,” Lieber said, who has published over 350 papers in peer-reviewed journals and whose publications have been cited “more than 70,600 times,” according to court documents.

As Jason Casey, the lead prosecutor remarked, “It’s not that the defendant just has no memory of what happened; it’s that he does not want to remember.”  In another email, Lieber himself wrote, “I will be careful about what I discuss with Harvard University & none of this will be discussed with govt. investigators at this time.”

“There is now no question that Charles Lieber lied to federal investigators and to Harvard in an attempt to hide his participation in the Chinese Thousand Talents Program,” stated Acting United States Attorney Nathaniel R. Mendell. “He lied to the IRS about the money he was paid, and he concealed his Chinese bank account from the United States. The jury followed the evidence and the law to a just verdict.”

The verdict was chalked up as “exceptional teamwork” by the U.S. Attorney’s Office and federal partners at the FBI, DCIS, IRS, and NIH. It was also viewed as a victory for US national security.

According to South China Morning Post, Lieber’s case is part of the US Justice Department’s “China Initiative,” which was launched in 2018 amid concern in Washington that Beijing was stealing technology through researchers and other academics that was vital for military and strategic purposes. Indeed, nearly 90 percent of cases investigated under that initiative have involved Chinese-American scientists.

This is ironic, given the fact that monetary contributions by the Department of Defense (DOD) and the National Institutes of Health (NIH) enabled Lieber to unleash Pandora’s box, integral in fulfilling the Anti-God Transhumanist Agenda of the MetaVerse which is now very much underway. 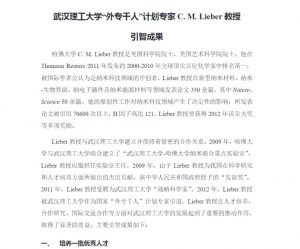 How exactly did Lieber manage to escape the 2020 coronavirus narrative despite the fact that on January 28, 2020  – at the beginning of this whole plandemic fiasco  – Attorney General Andrew Lelling accused the 62-year old chair of Harvard University of “espionage.” Two Chinese nationals were also involved, one of whom was caught at the Boston Logan Airport trying to smuggle biosamples in a sock.

Do you remember these events?

Unfortunately, too few have tracked Lieber’s legacy, despite the fact that his 66 patents regarding nanoscience sound like science FICTION designed to dehumanize us forever. In this future rendition, everything will be tracked and traced. Or as Klaus Schwab might put it, ‘you will be part machine and you will love it.”

Lieber was detained on January 23, 2020, a mere five days after Wuhan entered a lockdown. Recall, it was the first time a lockdown of this magnitude had unfolded. Today as we face year three of the coronavirus regime and the Omicron (anagram “moronic”) variant supposedly surges, lockdowns and curfews have already become the ‘new normal.’

Is he a modern-day brilliant mad scientist who knew what he was doing wrong but did it anyway? Why would he repeatedly lie when he literally accepted $100 bills in cash from Wuhan University (China) in brown paper bags?

Video snippets of a taped interrogation entered as a government exhibit hint to his raison d’etre. In the video, Lieber is clearly nervous, sitting uncomfortably in a chair near the wall. He admitted on January 28 that he was not seduced by the money, but by the prestige. “Every scientist wants to win a Nobel Prize,” he stated while adding that he was embarrassed. “I want to be recognized for what I’ve done.”

“One thing is true,” he said, “if people around the world are using what you started, which in this case… I was one of the first people — in 1998 — to figure out how to grow these nanoscale wires, the more people who use this around the world in different technologies, the better it is for me in terms of getting this goal that I’ve had since…”

Would a Nobel Prize be awarded to him for the cyborg cardiac tissue he helped create given all the vaccine-induced heart disease, or will he be awarded for his syringe-injectable mesh electronics with plug-and-play I/O interfacing? Perhaps he will receive the award for his “Neural Lace” brain implant, which “along with serving as a rite of passage, upgrades the human brain to be more competitive against A.I.” 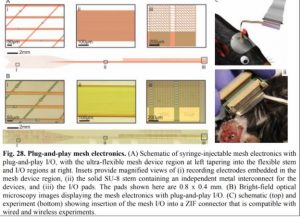 While Lieber may have been seduced by accolades, arguably the heavy weight may have contributed to developing his late-stage lymphoma. Nevertheless, he admits that his outlook on life changed after his diagnosis. He claims, as a result, he abandoned the Chinese bank account full of money.
But the damage had already been done. Many others also aim for the seamless merger of electronic devices with living biological systems – how very transhumanistic.

The patents are both brilliant and frightening.

US Senior District Court Judge Rya W. Zobel will sentence Lieber at a later date. Lieber faces up to 26 years in prison and over $1 million in fines. Lieber is the first academic to be charged; the trials of five more academics will be held next year.

For more on Charles Lieber, tune in to Ann Vandersteel’s Steel Truth interview of author Maryam Henein. It starts at the 31-minute mark.

Maryam Henein is an investigative journalist, and founder, and editor-in-chief of the health magazine and marketplace HoneyColony. She is also a functional medicine consultant and the director of the award-winning documentary film Vanishing of the Bees, narrated by Elliot Page. Follow her on Gab: @ladybee. Email her: maryam@honeycolony.com.