Vaccinating patients who have an autoimmune disease can cause significant side effects and even life-long complications, particularly if a live-virus vaccine is inadvertently administered. On the other side of the coin, giving a completely healthy person any vaccine can induce autoimmune disease.

Will vaccination raise the incidence of autoimmune diseases? What is the impact of increasingly crowded vaccination schedules? Will vaccination in various age groups increase the risk of coincidental temporal association? All of these issues are still under debate. However, for the time being, to avoid confusion in the medical community and the media, we must adhere to the guidelines established by expert consensus while ensuring a strict surveillance system to report possible side effects. Recommendation for vaccinating patients with autoimmune inflammatory rheumatic diseases (referred to as AIIRD) is based on the currently available evidence and the opinions of experts on the European EULAR task force. Primary recommendations for giving vaccines to patients who have AIIRD include:

i) vaccination should ideally be administered during stable disease;

iii) vaccination can be administered during the use of pain medications, anti-inflammatory drugs and TNF-inhibitors such as Remicade, Humira, and Enbrel , but before starting Rituxan (rituximab), a drug used to treat autoimmune diseases and some types of cancer;

v) BCG vaccination, for tuberculosis, is not recommended.

EULAR stands for the European League Against Rheumatism, an organization which “represents the people with arthritis/rheumatism, health professional and scientific societies of rheumatology of all the European nations.” EULAR collaborates on many projects with the American College of Rheumatology, its US-equivalent.

So, how “safe” are these recommendations?

Let’s look at a vaccination disaster that occurred in a “stable” patient.

Vaccinating during stable disease is not safe

An 11-year-old female patient, whose juvenile idiopathic rheumatoid arthritis (JIA) had been stable and in remission for 4-years using only small amounts of ibuprofen (Motrin). She received a live-attenuated rubella vaccine, and within 5 days, she developed a sudden relapse of her disease. The inflammation also involved her heart and she subsequently developed congestive heart failure. Her laboratory findings included elevations of her white blood count, serum C-reactive protein (CRP), IL-6 and other inflammatory cytokines. This pattern was similar to findings she had during the active stage of her JIA.  During her relapse, she was given steriods, ibuprofen, methotrexate after being given a strong medication classified as a phosphodiesterase inhibitor. Her symptoms gradually improved, but her inflammatory markers – CRP and IL-6 – remained elevated for more than 2 years. The authors of this case report suspected the acute occurance was “related with the molecular mimicry between rubella and JIA.”  (source)

Was this vaccination worth it? When the government and Industry talk about the cost-savings of vaccination, they never add in all the expenses and medical bills caused by vaccination.

Do Vaccines Cause Autoimmune Disease?

A new meta-analysis that is literally hot off the presses was released in May, 2017. The analysis included 12 studies linking vaccination and systemic lupus erythematosus referred to as SLE or simply lupus, and 13 studies that found a link between vaccination and rheumatoid arthritis (RA):

The meta-analysis concluded with the standard boilerplate ending: More research is needed to identify an association between vaccination and other rheumatic diseases. Bleh. How many more studies, how many more millions of dollars, are needed for research to “prove” what we already know: Massive destruction of health is occurring every single day by doctors – and nurses – who heavily push vaccines. 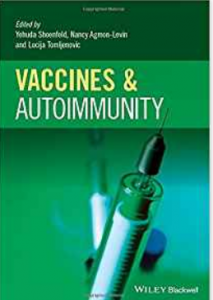 What’s In That Vaccine?

Vaccines contain either weakened (attenuated) viral agents or synthetic peptides and genetically engineered protein antigens, generally from bacteria. The solutions also contain adjuvants – typically aluminum – but the adjuvant can also be an oil, such as mineral oil or MF59. In addition, vaccines contain preservatives (thimerosal, 2-phenoxyethanol or formaldehyde), detergents (polysorbate 80 or Triton X100), and a long list of other ingredients such as gelatin, bovine extract, avian serum, animal kidney tissue (monkey or dog), human albumin, human aborted fetal cells, and more. The safety of the synergistic effects of residuals has not been investigated.

Therefore, each vaccination is truly an experiment.

In 2011, Dr. Yehuda Schoenfeld, the founder of Zabludowicz Center in Israel, discovered a new syndrome he named ASIA, which stands for Autoimmune Inflammatory Syndrome Induced by [vaccine] Adjuvants. Dr. Schoenfeld, author, and contributor to more than 1,700 scientific publications is laying bare the underlying mechanisms of how vaccine ingredients trigger autoimmune disease. His impeccable credentials are shaking the entire foundation of the vaccine orthodoxy. His recently published book, Vaccines & Autoimmunity, scientifically documents the associations between each and every vaccine and autoimmune illness. Section II of the book is titled, “Studies on Autoimmune Conditions Induced by Vaccination,” including MMR, hepatitis B, Gardasil, influenza vaccines and more. Section III, “Autoimmune Diseases Solicited by Vaccination” describes in detail the connections between vaccination and autoimmune diseases such has SLE, RA, type 1 diabetes, polymyositis, and more.

What’s in that vial is vile.

Vaccination is a dirty technology. It should have been abolished years ago and research dollars should have been applied toward restoring health instead of creating new drugs and products that contribute to long-term disease. Predicting who will have an adverse reaction, including the development of an autoimmune disease, is not uniformly possible. But even obvious risk factors, such as genetic predisposition and family history, go ignored.

The more we learn about how vaccines damage the immune system, the more obvious it becomes that a complete moratorium must be placed on the vaccination program until safety can be assured. Never forget that what’s coming through that needle may be deadly.

5 Comments on "Vaccine Dangers | Vaccinating Patients Who Have Autoimmune Disease"