Got Milk? Apparently, if you are a Nazi, you likely do, according to a writer for California State University’s college paper, the Daily 49er.

“You, along with the rest of the nation, have been so accustomed to hearing the benefits of milk that you probably didn’t even realize the subtle racism hidden in our health facts,” writer Samantha Diaz exclaims to the University’s legion of liberal readers, and now world.

“The federal endorsement of milk in American diets contributes to the problem by uncritically pushing people to drink milk, despite the potential detriment it has on non-white people’s health”

“Our current federal dietary guidelines urge people to drink three cups of milk a day, according to the 2015-2020 Dietary Guidelines for Americans. The main health benefit of milk is to guard against osteoporosis, a disease that weakens your bones — hence the ‘stronger bones’ rhetoric. While this is a very practical health benefit, osteoporosis affects Africans at a significantly lower rate than it does most Americans.”

It seems that some of Diaz’s angst is based on some art placed at the Museum of Moving Image which shows a video of neo-Nazis drinking milk.

“Amid all the tattoos of Third Reich iconography bouncing around, one thing stood out: The neo-Nazis were all drinking milk,” an article in Mic noted.

In the movie Inglorious Basterds, an infamous milk / Nazi scene is one of its most infamous. Christopher Waltz’s Nazi character takes down some cold milk shortly before shooting up the floor in hopes of killing Jews. 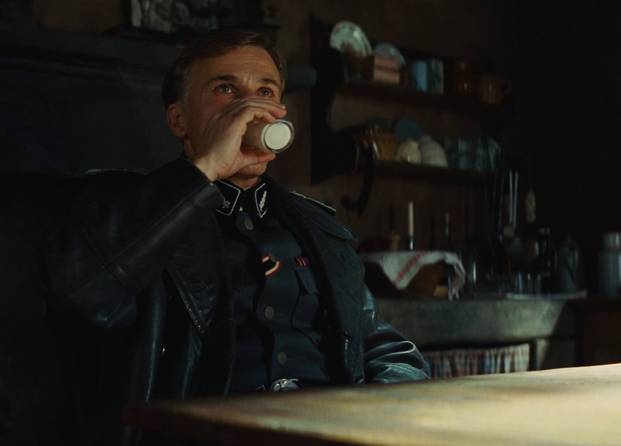 And then there is a 4chan graphic showing the ethnic divisions of milk tolerance. 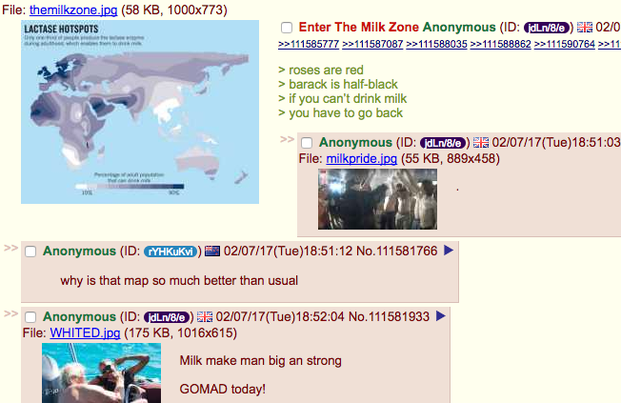 But if you think the lunacy stops on 4chan and at college universities, you’d be sorely incorrect. Major liberal news places are also feeling the milk hate vibe. The Los Angeles Times conducted an interview with movie star, Jordan Peele, and the Times brought it up as well.

“There’s something kind of horrific about milk,” Mr. Peele told the Times. “Think about it! Think about what we’re doing. Milk is kind of gross.”

Milk, it has been argued of late, is the new symbol of white supremacy in America, owing to its hue and the notion that lactose intolerance in certain ethnicities means that milk-absorbing Caucasian genetics are superior.

A Mother Jones article even asked, “Are the U.S. dietary guidelines on milk racist?” citing a study that shows not every ethnic group, African Americans in particular, requires the three glasses of milk per day that the federal government recommends to combat osteoporosis.

Got Hate? If you drink milk, the left now thinks you do.