While no one is paying attention, prized NanoTech King Charles Lieber is trying to walk away as a free man.

On March 31, 2022, attorneys for the former chair of Harvard’s Department of Chemistry and Chemical Biology attended a hearing at the John J. Moakley Courthouse in Boston to request an acquittal or a new trial. (Documents are sealed until mid-July unless purchased directly from the courts).

Initially, in January 2020, Lieber was accused of espionage. After nearly a two-year wait, a December 2021 trial commenced, and after six days, a federal jury found Lieber guilty of two counts of lying to federal officials about his involvement with the China-sponsored Thousand Talents Program (TTP). Lieber was also charged with four tax-related offenses, such as failing to file reports about a foreign bank account in China.

“With the indictment, they look tough, then they slow roll the prosecution until it is off the front page, then they’ll eventually acquit him like they just did for the obvious criminal [FBI deputy director] Andrew McCabe.

This prediction appeared on April 18, 2020, in an Aim4Truth article, detailing Papa Lieber’s ties to RCA and David Sarnoff. Indeed, the DOJ presser on January 28, 2020, made it seem as though the government was going to crackdown. Then things fizzled out, Lieber disappeared from the narrative, and the charges were diluted.

Charlie And The China Initiative

The current narrative paints Charlie as the “victim,” a casualty of a “misguided China Initiative.”

For background, the Department of Justice’s China Initiative was launched under the Trump administration in 2018 to target those suspected of “trade secret theft” and “economic espionage.” Now under Joe Biden, the program is being billed as a “controversial colossal blunder” that “lost its focus.”

Allegedly, the program had “gone off the rails” with respect to prosecutorial misconduct and a disproportionate focus on individuals of Chinese heritage. This is ironic, given the DOJ just arrested five individuals who were stalking, harassing, and spying on Chinese nationals on behalf of the PRC Secret Police. Basically, the Chinese government was spying on their own people in the United States.

Nonetheless, Atty Mukasey stated this entire program was an embarrassment.

“It has left the DOJ with egg on their faces… And that’s why right after our trial… the Department of Justice shut down the China Initiative.”

Lieber’s attorneys added that it was this erroneous China Initiative that led to his being questioned by the Department of Defense and by Harvard officials on behalf of the National Institutes of Health.

Researching on this supposed failed China Initiative, I learned that the government of the United States had 404’d the page. In other words, they had removed the website content.  You can now only find it in the DOJ archives.

In addition to a faulty program, his attorneys continue to maintain Lieber’s innocence and stated that the allegations against him were both vague and without merit.

Personally, I would argue Lieber is guilty of ushering in an anti-God transhumanist agenda with nanotech inventions that include virus-sized transistors, brain-machine interfaces, and cyborg heart tissue. Alas, fusing man with a machine is not illegal. Go here to learn more about his frightening 66-plus patents.

During the recent hearing, his attorneys added that the accusations always were very unclear, both to the questioners and “certainly to Professor Lieber.”

“Was it grant fraud, was it espionage, was it some kind of other fraud, was it a violation of conflict of interest rules at Harvard? And shamefully, Harvard never even provided a lawyer to help. Instead, they left Professor Lieber for the slaughter.”

But had they really?

Was Lieber a patsy or was Harvard simply putting on a show for appearances, knowing full well that he was very much a prized asset?

Incidentally, Lieber’s CV is loaded with awards and accolades, with Thomson Reuters identifying him as the top chemist in the entire world. In a March 2021 letter, 41 professors, including some of Lieber’s Harvard colleagues, objected to the charges brought against him. They argued the prosecution inflicted damage to academic freedom and scholarly collaboration.

In truth, Harvard knew Lieber was working with the Wuhan University of Technology (WUT). They had a joint Nano Key Lab and he was the director as well as the ‘strategic scientist’ for WUT. Harvard profited from his pioneering nanotech. As did the DOD, DARPA, NIH, and China.

Lieber has 11 Chinese patents. China has even awarded him the Friendship Award, and a WUT employee thanked him for his “irreplaceable contribution to China.”

Nonetheless, during the approximate ten minutes of opening statements, his attorney maintained that the only remaining allegation was that Lieber was selected as a member of the TTP. “Which, even if it’s true, is not illegal, even if you ask the government.”

Two years and gobs of gaslighting later, you would never suspect that the trial evidence overwhelmingly illustrated that Lieber knowingly and willfully lied to Harvard when he falsely denied that he had participated in the Thousands Talents Program (TTP). The TTP is a Chinese government recruitment scheme to attract foreign scientists, and that effort would provide $1.5m in funding for a new lab at WUT. Mr. Lieber himself received up to $50,000 a month, some of which were deposited in a Chinese bank account, along with compensation for living expenses.

How about the evidence illustrating that Professor Lieber knew that the lie, that false statement, would be transmitted by Harvard to NIH in the letter that was ultimately sent?

Government attorney Donald Lockhart reminded the courts that this was not a grant fraud prosecution. Lieber lied to two different federal agencies concerning his participation with the Chinese Communist Party’s TTP. He concealed both a substantial income from that same program in two separate tax years, as well as a bank account, which held roughly half of his salary under the TTP.

Lockhart reminded the courts that Lieber himself in his videotaped confession said that “the very essence of the Thousand Talents Program is that you’re paid a salary by China and that China uses this program to seduce people.”

“With his eyes set on a Nobel Prize, Lieber began a dangerous affair with the Chinese government ten years ago—and now he is facing the consequences,” wrote the National Association of Scholars.

In the 2020 FBI interview, parts of which jurors saw on the fourth day of the trial, Lieber admitted to the agents conducting the interrogation that he did not declare payments he received in $100 bills during trips to Wuhan. He also told the agents he “wasn’t completely transparent by any stretch of the imagination” when speaking to Department of Defense investigators two years earlier in 2018.

Lieber admitted to literally being given cash in paper bags which he brought back into the United States. 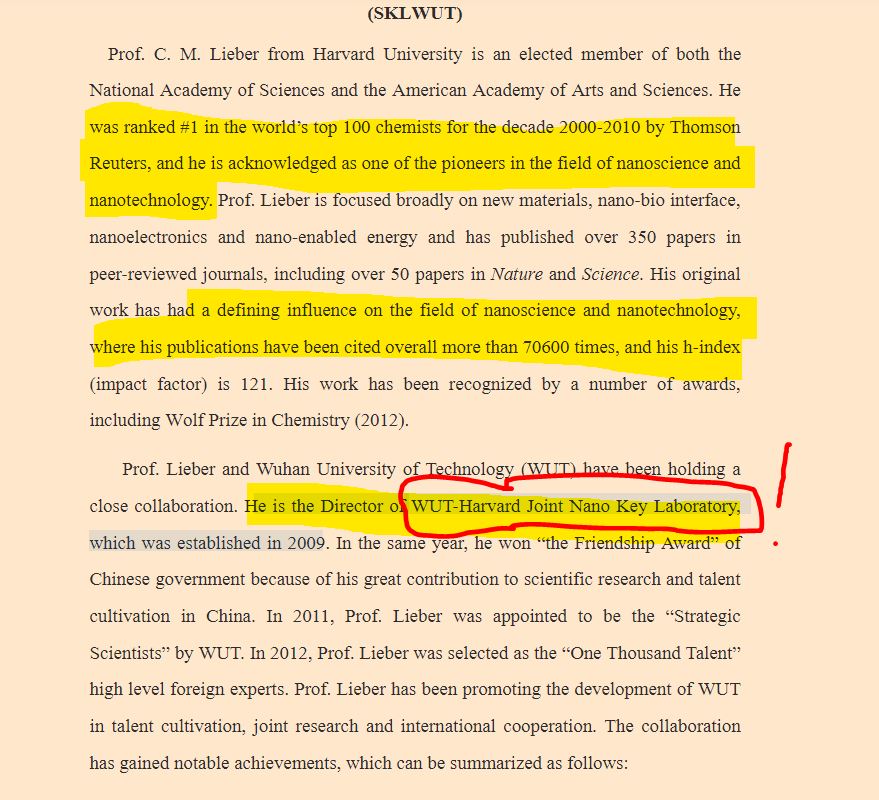 “Professor Lieber,” added Lockhart, “caused Harvard University to tell NIH that he was not and had never been a participant in the Thousand Talents Program, when, in fact, he had signed a three-year contract in July of 2012.”

Worse, added Lockhart, was that Lieber had the luxury of reviewing the draft letter that Harvard wrote to NIH. “He ha[d] a final chance to correct this statement. He doesn’t. You look at the trial evidence. He did a redline copy of this letter, and he left that damning lie statement intact.”

In essence, Lieber’s attorneys seemed to be grasping for straws, focusing on frivolities to free their client. For example, they reiterated their previous argument that the FBI agent who interviewed Lieber failed to properly inform him of his Miranda rights. In the new trial, his defense requested to exclude his interrogation footage from the evidence.

The CCP under Xi Jinping released its 14th Five-year plan with special emphasis being laid on the ‘1000 Talents Plan’. The CCP is constantly trying to access technological advancements and innovations taking place in the USA on USA taxpayers’ money.  The stolen technological know-how is being essentially used by Beijing for military and economic gains under Xi Jinping’s civil-military fusion.

In a just world, Lieber would face up to 26 years in prison and $1.2m in fines. But instead of being sentenced, Judge Zobel will now consider the defense’s motion and announce a decision at a later date.

Instead, will Charlie end up walking away as a free man while the world is left to deal with his evil transhumanist creations?